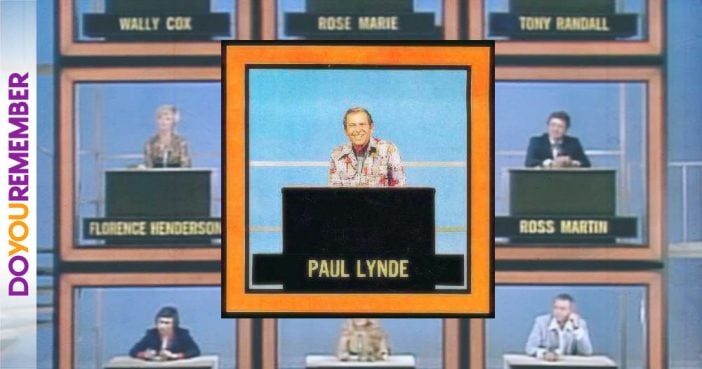 In 1966, Lynde debuted on the fledgling game show Hollywood Squares and quickly became its iconic guest star. Eventually he assumed a permanent spot as the “center square,” a move which ensured that he would be called upon by contestants at least once in almost every round.

On Hollywood Squares Lynde was best able to showcase his comedic talents with short, salty one-liners, spoken in his signature sniggering delivery. Many gags were thinly veiled allusions to his homosexuality. Asked, “You’re the world’s most popular fruit. What are you?” Lynde replied, “Humble”. Asked how many men are on a hockey team, Lynde said, “Oh, about half.” Asked whether it was against the law in Texas to call a Marine a “sissy,” Lynde quipped, “I guess I’ll have to take the law into my own hands.”

Other jokes relied on double entendre, an alleged fondness for deviant behaviors, or dealt with touchy subject matter for 1970s television. These great questions and answers are from the days when ‘Hollywood Squares’ game show responses were spontaneous, not scripted, as they are now.

Here are a few more of Paul’s greatest questions and answers are from the days when ‘Hollywood Squares’ game show responses were spontaneous, not scripted, as they are now.

Peter Marshall was the host asking the questions, of course…

A. Paul Lynde: If you hold their little heads under water long enough.

A. Paul Lynde: Because chiffon wrinkles too easily.

Q. It is considered in bad taste to discuss two subjects at nudist camps. One is politics, what is the other?

Q. When you pat a dog on its head he will wag his tail. What will a goose do?

A. Paul Lynde: Make him bark?

Q. If you were pregnant for two years, what would you give birth to?

A. Paul Lynde: Whatever it is, it would never be afraid of the dark.

Q. It is the most abused and neglected part of your body, what is it?

A. Paul Lynde: Mine may be abused, but it certainly isn’t neglected.

Q. According to Ann Landers, what are two things you should never do in bed?

A. Paul Lynde: Point and laugh

Q: “What unusual thing do you do if you have something called ‘the gift of tongues’?”

Lynde: “I wouldn’t tell the grand jury. Why should I tell you?”

Q: “The great writer George Bernard Shaw once wrote, ‘It’s such a wonderful thing, what a crime to waste it on children.’ What is it?”

Q: “Paul, any good boat enthusiast should know that when a man falls out of your boat and into the water, you should yell ‘Man overboard!’ Now what should you yell if a woman falls overboard?”

What an absolute riot he was! 🙂 Hope you enjoyed those!

RELATED: More Than A Game Show Host, Alex Trebek Has Made Many Other Appearances

Here’s our deep dive into the surprisingly unrestful life of the hysterical, Paul Lynde: