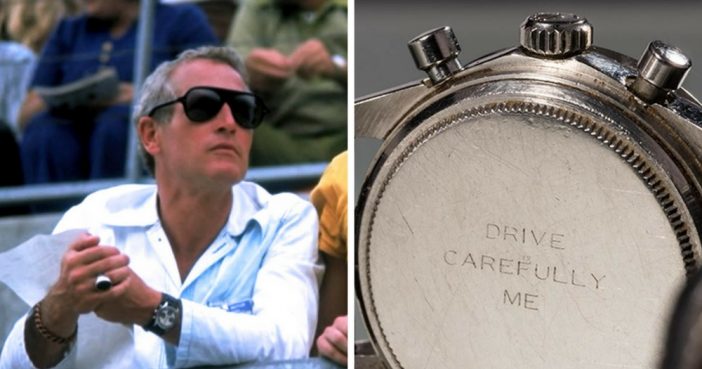 A Rolex watch that once belonged to the iconic actor, Paul Newman sold for a world record $17.8 million at a Phillips auction on Thursday in New York. The Rolex Daytona timepiece shattered the previous mark for a wristwatch ― $24.4 million fetched for a Patek Philippe pocket watch sold in 2015, according to CNN.

According to Phillips’ catalog note, The watch was a gift from his wife, actress Joanne Woodward who bought the stainless steel “Daytona Rolex” for Newman nearly 50 years ago. She had a message, “Drive Carefully Me” engraved on the back.

The two actors, who were married for 50 years before Newman’s death in 2008, starred together in the 1969 racing movie “Winning” that inspired Newman’s real-life racing career. Newman gave the watch to his daughter’s college boyfriend, James Cox, in the 1980s, and he wore it for years.

Newman was seen wearing the watch in hundreds of photographs, the catalog noted, and it became known in some circles as the “Paul Newman” watch. His daughter, Nell Newman, confirmed the provenance of the timepiece, which officially sold for a total amount of $17,752,500. The buyer wished to remain anonymous.

According to Forbes, Newman had given the watch away in 1984 as a gift to James Cox, who dated Nell and is still a close friend. Bloomberg noted Cox decided, in part, to sell it so some of the proceeds could benefit the Nell Newman Foundation, for which he serves as treasurer.