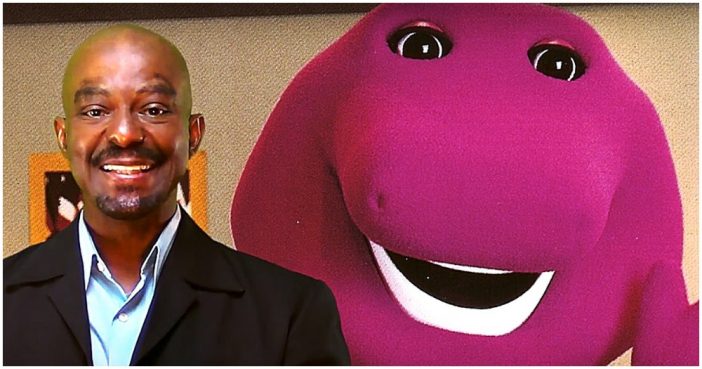 Even if you were one of the grumpy few who didn’t love Barney … well, Barney loved you anyway, and he considered you to be part of his family. He told you so, every episode, and even sang a song about it so you’d never doubt him. While the dinosaurs in Jurassic Park just wanted to eat people, Barney wanted to reach out through every TV screen across the world, and give all those ’90s kids a great big hug. Friendships just don’t get much better than that. If only real-life buddies could be so unrelentingly dedicated to everyone else’s happiness.

We’d like to think that human beings are capable of such sincere love, but honestly, that dancing, prancing, not-so-prehistoric purple T-Rex totally puts mankind to shame. However, there’s at least one person who seems to be just as joyful, optimistic, and loving as Barney himself: the very man who wore the purple suit, David Joyner.

He was an electronics engineer, a massage therapist … and a human mannequin?

The real David Joyner certainly isn’t a dinosaur, but he’s not a mere human being, either: He’s a superhuman who has lived a life so wondrously eclectic that he makes Dos Equis’ Most Interesting Man in the World look like a homebody in comparison. For one thing, Joyner’s highly spiritual: according to Rolling Stone, Joyner is an energy healer, a Reiki practitioner, and a dedicated follower of Tantra.

The idea of a spiritual purple dinosaur is already amazing enough, but it gets better because Joyner is also smart as a whip. In an interview with Trainwreck’d Society, Joyner revealed that in his youth, he scored an ITT Tech degree in Electronic Engineering, and then worked for Texas Instruments as a software analyst. Meanwhile, he also became a licensed massage therapist. So yeah, the real guy who played Barney could simultaneously massage you, be your spiritual counselor, and fix your computer — all at the same time. He’s also a talented musician, a skilled dancer, and an athlete. (That’s why everyone loved that goofy-looking Tyrannosaurus so much!)

However, deep down, what Joyner really wanted was to be an entertainer. Surprisingly enough, the weird side gig that most prepared this talented guy for his purple future was in a mall. There, he worked as a live mannequin, standing in store windows and moving like a mechanical robot. As far as part-time work goes, hey — it’s better than working a cash register.

He had a psychic premonition about his audition

David Joyner is one spiritual dude. That’s not a footnote on his wicked-crazy-cool resume, either: His spirituality is a key aspect of his motivation, drive, and purpose. He told Business Insider he knew beforehand that he was going to get the Barney role, stating “I was supposed to do this character.”

According to Joyner, he comes from a family filled with psychic energy, and a lot of clairvoyance, so when it’s time to make big life decisions, he has always trusted his dreams to guide the way. Sure enough, on the night before his big audition to play Barney, he had an intriguing dream about the now-popular character. In this vision, Barney was passed out on the ground, and Joyner had to rush to the dinosaur’s rescue, saving him through mouth-to-mouth resuscitation. Good thing Barney doesn’t have sharp teeth.

The next day, as Joyner was driving to the audition, he recalls seeing a Southwest Airlines billboard with the caption “Breathe life into your vacation,” just as he had dreamed of breathing life back into an unconscious Barney. Joyner was inspired by this, and took that passion into his audition, successfully scoring the role of a lifetime and helping create one of the biggest cultural icons of the ’90s. Joyner said he wasn’t too surprised to get the call, though. After the premonition, he was already pretty sure he had it locked in.

He played Barney for 10 years

To kids watching the show, Barney was Barney, a real dinosaur. As adults, it would be tempting to think that the guy playing Barney must have been a down-on-his-luck actor answering a cheap job advertisement, struggling to pay the bills with some weirdo side gig that involved wearing an insanely hot costume and bouncing up and down. According to People magazine, the 70-pound purple costume sometimes got up to 120 degrees on the inside, and the actor could only look out through Barney’s mouth. Furthermore, since Barney was actually voiced by Bob West, not the guy in the suit, being Barney might seem like a rather thankless job.

But David Joyner has been quite outspoken about how much he loved playing Barney. In his own words, “Barney was beautiful. Barney was very, very good to me. I loved being Barney.” Joyner was so passionate about the role that he played Barney for over a decade, securing his place in history as the one true happy, singing dinosaur.

That’s not just surprising, but actually rather inspiring. Just as Barney gave hope to kids all over the world, it looks like Joyner gives hope to adults. So the next time you get grumpy about working in food service or sitting at a desk all day punching numbers, just remember that this cheerful dude managed to turn what could have been a tough, thankless job at the time of his life.

In Western culture, the term “tantra” sends more immature individuals into perverted giggling fits. However, according to David B. Gray of Oxford Research Encyclopedias, tantra is widely misrepresented in the West. History shows that tantra is actually a complex spiritual system dating back thousands of years, and tantric traditions have deep roots in Buddhism, Hinduism, and other prominent faiths.

Wait, so how does this relate to Barney? Well, David Joyner is big on tantra. In his interview with Trainwreck’d Society, Joyner described himself as being a student of White Lotus Tantra since he was 19. The foundation of Joyner’s tantric practice centers on love, and he explains that tantra is “all about pulling in God’s Divine Sacred love from the universe through Spirit, Mind, and Body, and sharing it.” In order to properly portray Barney, Joyner dove deep into his spiritual practices. Before he hopped into the costume, he always dedicated a half-hour block to meditation and prayer. Once he got on stage, he felt the divine energy radiating through him, as he sought to spread optimism, mindfulness, and joy to the many children watching the show.

Deep down on the inside, Barney was basically a devoted dinosaur monk, living mindfully, always smiling, and spreading happiness to others — whether they be a human, canine, or terrible lizard. Those velociraptors in Jurassic World might be smart, but this bouncy purple T-rex could probably teach them a thing or two about finding spiritual happiness.

Page Page 1 of 3
Previous article: Horror Movie Monsters Unmasked: Meet The Actors Underneath
Next Post: Can You Match the Actor to the Movie Monster?