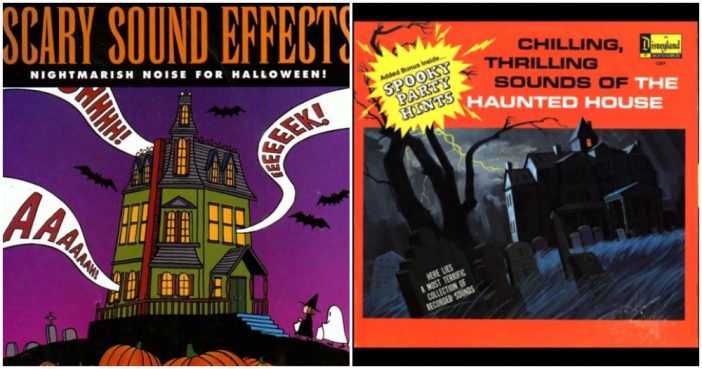 A CHAIN RATTLES AND THE wind blows. A skeleton’s bones clatter and a woman shrieks. A wolf growls and a ghost whispers in the darkness.

But where do all these spooky sounds come from? Who is out there torturing screaming victims and creating ominous soundscapes? Polite English musicians, for one.

“Halloween sounds are timeless, I think. An old Disney Halloween album is still as popular as ever, and although the market has been saturated in recent years, the sounds themselves do not go out of fashion as far as I can tell,” says Leigh Haggerwood, a professional media composer and musician who has created six Halloween albums himself, as well as a number of others under contract for third parties. “The most popular album I’ve produced to date is Halloween Horror–Scary Sounds and Music. It sold over 50,000 copies in one week back in 2009 and was higher than Thriller in the iTunes chart at one point,” he says.

The history of modern sound effects can be traced back to the live radio plays of the 1920s. Live sound-effect creators would stand in the studio breaking light bulbs, clapping wooden boards together, and shaking panes of sheet metal to recreate the sounds of, say, breaking windows, slamming doors, and growling thunder. A 1931 annual produced by the BBC defined sound effects broadly as “everything that comes out of a loud-speaker, except what is usually classed as ‘Music’ or ‘Speech.’” Within that wide definition, the art of sound-effect creation and the foley arts (for movies) began to evolve. That same year, America got its first full-time sound effects department, at CBS, which is credited as having been a driving force in the development of the industry as a whole.

Page Page 1 of 2
Previous article: The Celebrity Wedding Everyone Was Talking About the Year You Were Born
Next Post: High-School Dancers Perform The ‘Wizard of Oz’ At Their Pep Rally And It’s Absolutely Amazing! Watch The Performance Here