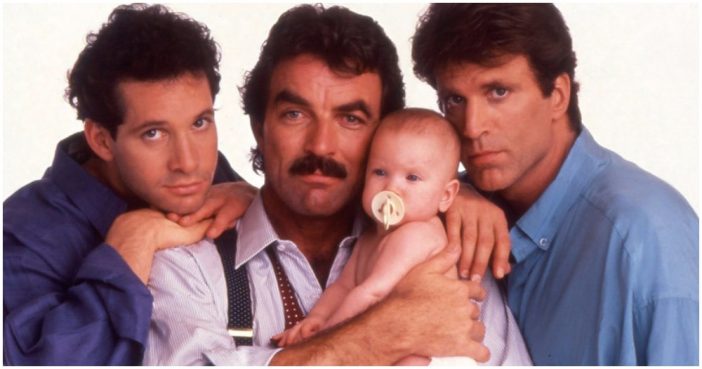 Three Men and a Baby was the highest grossing film of 1987, even though on paper it seems like one of the most ridiculous movie ideas ever pitched. It’s about three professional men in their late 30s sharing a ridiculously awesome Manhattan apartment and raising a baby that gets left on their doorstep. Oh yeah, and they also get mixed up in a heroin deal, because that goes perfect with wacky family fun, right? And if that doesn’t sound weirder than you remember, try this fun fact: Spock directed it. Yep, Leonard Nimoy, the actor who played Mr. Spock on Star Trek, directed Three Men and a Baby. Let’s check in on the cast of this quintessentially ’80s classic to see where these actors and actresses are today.

Tom Selleck played Peter Mitchell, the architect who, by his own admission, “builds 50-story skyscrapers and assembles cities of the future,” but for some reason can only make one-third of the rent each month. He also got peed on for real by one of the twins who played baby Mary while they posed for the movie poster. Geriann Blair, the twins’ mother, told Today (via the Daily Mail) about the Annie Leibovitz cover shoot in which Selleck became a human diaper. “He looked over at me and said, “Is this safe?” [In reference to holding a diaperless baby] and I said, “Oh, I don’t know.” And then, there she goes, sure enough! So that was a real shock,” Blair said.

Fortunately, Selleck recovered and went on to a lucrative and presumably baby-pee free career. He was at the tail end of his Magnum, P.I. run when Three Men and a Baby came out, and he told People he deliberately slowed his career down by quitting the popular show to spend more time with his family on their ranch in Ventura County, Calif. In that same 2012 interview, Selleck said he was only working every other week on Blue Bloods (2010-) and doing one Jesse Stone TV movie per year to keep his workload light, and by the looks of his IMDb page, that seems to still be his plan as of this writing. Sounds like a pretty sweet gig if you and your chiseled granite face and fantastically timeless mustache can get it.

Ted Danson had arguably the most success of anyone in the cast, which is remarkable because he played Jack Holden, the deadbeat actor who didn’t even know he had a kid and almost got his innocent roommates arrested for dealing heroin. But it all worked out because, in the ’80s, that’s just what happened in the case of wacky mix-ups.

Already a household name from Cheers (1982-93), Danson went on to a crazy string of hits with Becker (1998-2004), a recurring role on Curb Your Enthusiasm (2000-), and about 14 incarnations of CSI. And he did it all after going gray seemingly overnight, so he’s looked like he’s 70 for decades. In an interview with Esquire, Danson admitted that he started dying his hair during Cheers and all through Becker, eventually sporting a hairpiece to cover up a thin spot on his crown. He also talked a little about his work with Oceana, “the world’s largest organization dedicated solely to ocean advocacy,” for which he serves on the board of directors. Danson’s not showing any signs of slowing down, either. At the time of this writing, he’s on another hit show, The Good Place (2016-) which got picked up for a second season, and we have to say his hair looks as terrific as ever, even if it’s not real.

Like Danson, Steve Guttenberg was already well known to audiences from his work in the Police Academy (1984-94) movies. In fact, he had four of them under his belt by the time he starred in Three Men and a Baby as Michael Kellam, the cartoonist whose crazy drawings were featured all over the walls and even elevator doors. Did we mention this was the ’80s? You had to kind of feel bad for Guttenburg in this role. Standing almost a full foot below both Danson and Selleck, and with no real subplot to speak of, his character seemed like it was the result of a last minute studio note because someone thought Two Men and a Baby might seem too gay.

With that in mind, it’s no real surprise that Guttenberg didn’t hit a hot streak afterward. In fact, he has almost no recognizable credits post-Three Men and a Little Lady, the 1990 sequel, except for a year-long stint in Veronica Mars ending in 2006 and Sharknado 4: The 4th Awakens (2016), which we almost feel bad mentioning. So, take a wild guess who stated publicly that he’d be up for another Three Men installment? In 2009, Guttenberg told WENN (via Digital Spy) that “Disney’s developing Three Men and a Bride. That’s going to be a smash. A smash hit. They’re bringing everybody back for that.” He also said, “Nobody knows about it. I’m the first to talk about it.” Four years later on The Talk (via Entertainment Weekly), Selleck said he’d do it if there was a decent script, and now another three years after that, still nothing. Sorry Guttes, but it doesn’t look like this is happening. (Does he go by Guttes? We feel like he should.)