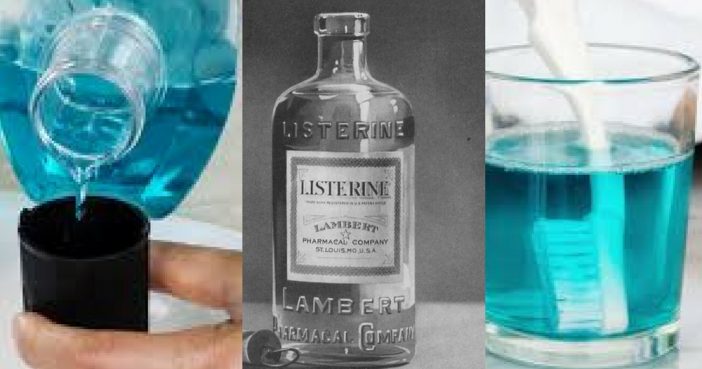 Listerine is a brand of antiseptic mouthwash product promoted with the slogan, “Kills germs that cause bad breath”. Inspired by Louis Pasteur’s ideas on microbial infection, the English doctor Joseph Lister demonstrated in 1865 that use of carbolic acid on surgical dressings would significantly reduce rates of post-surgical infection. Lister’s work, in turn, inspired St. Louis-based doctor Joseph Lawrence to develop an alcohol-based formula for a surgical antiseptic which included eucalyptol, menthol, methyl salicylate, and thymol (Its exact composition is a commercial secret). Lawrence named his antiseptic “Listerine” in honor of Lister.[

Although Listerine was formulated as a surgical antiseptic it has historically been used for all sorts of things. In fact, it wasn’t actually marketed for bad breath until the 1970s! If you’ve got a stash of Listerine sitting in your bathroom closet, check out some of the cool, unconventional ways that you can use it—and maybe save yourself a few bucks! Here are some surprising alternative uses for everyone’s favorite mouthwash.

Mouthwash is fantastic for getting rid of stinky breath, but it can kill other odors, too. If you ever find yourself running low on deodorant, dab some Listerine under your arms with a cotton ball to fight off body odor.

A 30-minute soak in Listerine and white vinegar can rid your feet of toenail fungus. Rinse, scrub, and repeat once or twice a day and you should see the infection clear right up.

Nobody likes lingering toilet odors. In a pinch, you can clean your toilet by pouring in a little mouthwash. Scrub with your toilet brush for a minty-fresh bowl.

4. Put A Stop To Itching

Are mosquitoes giving you a hard time? Is poison ivy ruining your skin? Grab some mouthwash. Dabbing some Listerine on bug bites and other infected areas on your skin can help relieve the itching sensation.

You’re probably hesitant to splash a blue liquid on your hair, but don’t be. At one time, Listerine was marketed as a dandruff remedy. If your head needs some relief, try massaging some Listerine into your scalp. Wrap your hair up in a towel and let it work its magic, then rinse it out. Bye, bye, dandruff!

Between the food, toys, and flea medications, we end up spending a lot of money on our precious pup. For a cheaper and more gentle solution to fleas, dilute some Listerine with water or mix it with some shampoo and rub it on your furry family member. This will help Fido fight off those pesky fleas without using harsh chemicals.

Did you know Listerine can also fight acne? It’s true. Don’t blow your budget on expensive acne treatments when you can apply Listerine morning and night instead.

You might have seen mouthwash and toothbrushes sold together already – they’re kinda the perfect pair! Not only can Listerine kill the bacteria in your mouth, it can kill any bacteria lingering on your toothbrush. Soak your toothbrush in Listerine for a few hours to keep it fresh and germ-free.

Page Page 1 of 2
Previous article: Life Hacks: 10 Unexpected Ways To Use Vinegar Around Your House
Next Post: Roberta Flack Rushed To Hospital From Apollo Theater