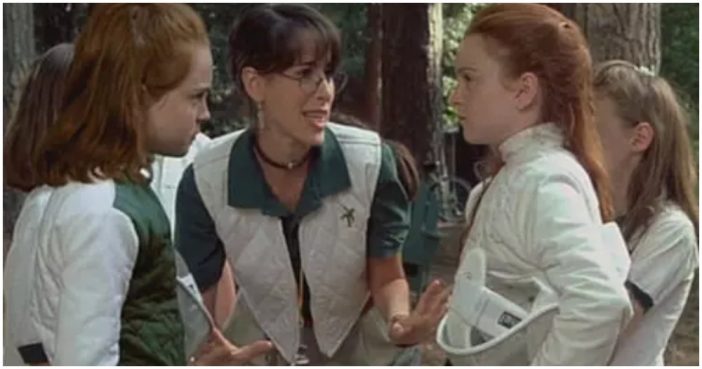 1. Why did Annie and Hallie become such fast enemies?

There was literally no reason that they should immediately hate each other like they did. Think about it (and I urge you to think!): they were at the same summer camp so they both like OUTDOORSY things. They met while fencing, so that’s another thing in COMMON. I can get behind Hallie sort of being pissed that she fell into a bucket of water, but for 11-year-olds, that should result in passive aggression at best.

2. THE HIJINKS! There’s no way kids of that size could pull off the pranks they pulled off.

Yes, I am talking about putting the beds on top of a cabin. This one bothers me so much. How did a bunch of 11-year-olds climb onto the roof, disassemble, reassemble and also make the beds of all of the other campers without ANY ONE OF THE ADULTS saying anything? And we’re meant to think that the whole “putting the stuffed bear on the flag of England” thing was nailing the coffin SHUT.

3. HOW DID THEY NOT REALIZE THEY WERE TWINS RIGHT AWAY?!

They were BOTH PLAYED by Lindsay Lohan. Which means they look IDENTICAL. They are the exact same person! They didn’t even think they were twins until they were all, “WE BOTH LIKE PEANUT BUTTER WITH OUR OREOS?! WHAT?!” And THEN they figured out the “same birthday” “same parents” “same DNA” thing.

4. What kind of parents split up their twin children because they hate each other?

If I were either of the Lindsay Lohans, A) I would not want to switch places because clearly, the other parent did not care about me enough to every check up on me or even tell my twin I existed. B) I would not want to go back home because clearly, that parent didn’t care to tell me I HAD A SIBLING. C) I would probably not keep my cool enough to carefully plan a “switching places” scheme. I would call them straight away and scream and then sleep easy knowing I have so much emotional capital against my parents. Also, this is what you get mad about. Not falling into a bucket.

This is an issue I have with most stepmothers-to-be in movies. Why do they always keep their boarding school plans secret? Is boarding school really the equivalent of hell on earth? More importantly, are boarding schools just full of kids whose dads married jerks? “Oh I thought I was going to go to a normal high school like the other normal kids, but you know how it is – Dad married Sherry so here I am at Phillips Exeter Academy. Suffering.”

Page Page 1 of 2
Previous article: How To Clean A Vintage Rain Lamp
Next Post: 20 Of The Most Famous And Iconic Wedding Dresses Of All Time