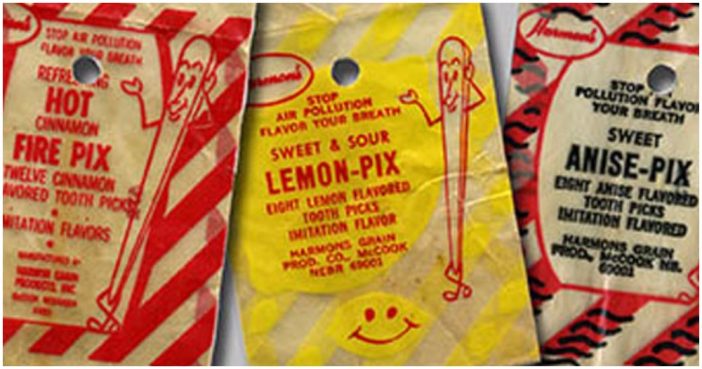 It is the rare product that can both look stylish and promote good dental hygiene. Such is the case with cinnamon toothpicks. For over sixty years, these flavorful little sticks not only helped you rid those pesky scraps of food from your teeth, they also made you look pretty cool.

The toothpick is a simple tool (we won’t bore you with how it works), used since at least the Middle Ages to help dislodge food. We don’t know if anyone ever thought of flavoring the sticks back then, but we do know that a druggist named August T. Baden began handing the cinnamon variety as children’s treats in 1949. Little did he know how popular his concoction would become.Commonly made from birch wood, cinnamon toothpicks became very popular in the 50s and 60s, an era when a dangling toothpick from one’s lips reeked of coolness.

One of the first companies to commercially manufacture them was Harmon’s Grain Products Inc., who marketed them as a product “to sweeten breath and curb appetite and smoking urges.” Alongside the cinnamon variety, Harmon’s originally offered lemon and anise (black licorice) flavors as well, but neither gained much traction.

For decades, small bags of cinnamon toothpicks were a common sight in the candy aisle, with none of the calories inherent in their confectionery cohorts. Today, they are harder to find but still available in stores and online. Sadly, Harmon’s went out of business in 2008, but there are some twenty other current manufacturers of the product, proving that there are still plenty of people out there who prefer the rebellious look, and breath-freshening abilities, of a cinnamon toothpick.

Pick up a Pack for Nostalgia’s Sake Here.

Previous article: 10 Famous People Who Invented Amazing Things On The Side
Next Post: Sir Tom Jones Postpones US Tour Due To Ill Health