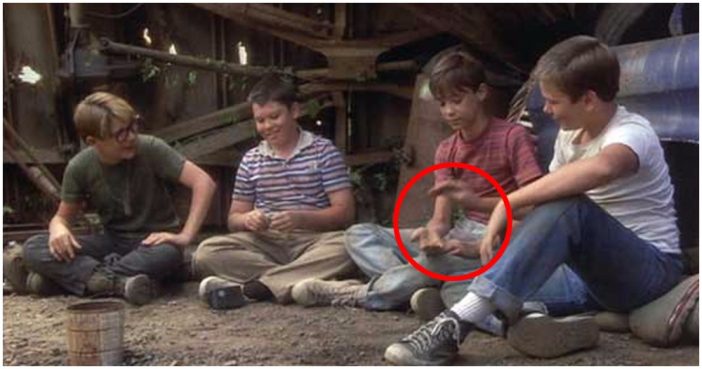 No film quite captures what it’s like to be 12 years old more than Rob Reiner’s Stand By Me. Based on the Stephen King novella The Body, Reiner’s film adaptation follows four boys who spend a weekend late in the summer of 1959 following some train tracks to find the body of a missing boy.

Here’s a look at some fascinating facts to commemorate this bittersweet ode to childhood on its 31th anniversary.

“I was awkward and nerdy and shy and uncomfortable in my own skin and really, really sensitive,” said Wil Wheaton in 2011, “and River was cool and really smart and passionate and — even at that age — kind of like a father figure to some of us.

Jerry was one of the funniest people I had ever seen in my life, either before or since, and Corey was unbelievably angry and in an incredible amount of pain and had an absolutely terrible relationship with his parents.”

2. The boys were actually completely safe during the train-dodge scene… But they weren’t safe from Reiner’s yelling!

This scene was in part performed by Wil Wheaton and Jerry O’Connell’s stunt doubles, who were women with cropped hair. In other parts, when the train appeared to be coming up close behind the boys, an extra-long telephoto lens was used to create this effect – the train was actually much further away than it appeared. In the scene, Rob Reiner yelled at the Wheaton and O’Connell out of frustration because they didn’t seem frightened enough.

When they began to cry, they filmed the scene.

3. The cigarettes the boys are seen to smoke are made of cabbage leaves…

…as Reiner demanded. The director was ardently a non-smoker and in fact campaigned for anti-smoking laws in California.

4. The four lead boys got into all sorts of trouble when they weren’t on set

They all misbehaved plenty in their free time! For example, at their hotel, Wheaton rigged the arcade machines so that they could be played for free, without inserting coins.

Feldman disclosed that he and Phoenix were both smoking pot, and Reiner claims that Phoenix lost his virginity to a family friend at age 15.

5. The swamp in the film was man-made, but the leeches were not

Ahead of the shoot of the leech scene, the production crew dug out a pond to be used as the swamp. It was then filled with water and left for a while.

When the time came to film the scene, the pond was thick with moss. The leeches used in the scene were 100% real. Take a look at that scene below!

6. Jerry O’Connell accidentally ate pot cookies in one of the film’s locations

The cast and crew attended a Renaissance Fair nearby to one of the film’s locations. Whilst there, they bought some cookies which no one knew were pot cookies.

The crew later discovered Jerry O’Connell high and crying in the park after he’d eaten them.

7. The boys hadn’t seen Ray Brower until they filmed the scene

They were forbidden to look at Kent Luttrell until the unveiling – this was so that their responses to the body were as authentic as possible.

8. Stand By Me was almost called “The Body”

The title “Stand By Me” came from the Ben E. King standard that plays during the end of the movie.

9. At the box office, the film earned back $52 million

So that $8 million investment of Lear’s really didn’t go to waste! “Stand By Me” is still a ’80s Classic!

Click for next Article
Previous article: Twelve Faces and Forty Two Eyes. What am I?
Next Post: Royal Bodyguard Speaks About The Surreal Period After Princess Diana’s Tragic Death