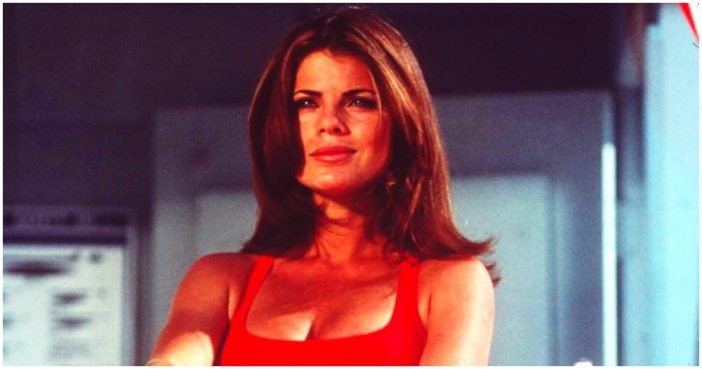 Even if you didn’t watch Baywatch (1989-2001), chances are you totally recognized lifeguard Yasmine Bleeth. But in the decades since her unceremonious exit from the iconic ’90s drama, Bleeth quickly went from posing for magazine covers to complete obscurity. What prompted her abrupt exit from Hollywood? Here’s what we know. Just as her career was skyrocketing in Hollywood, Bleeth reportedly began to develop an intense addiction to cocaine.

Bleeth told Glamour in 2003, that her drug problems were triggered by her rough relationship with then-boyfriend Richard Grieco. “I was tired of feeling hurt. I was losing faith in love. I just wanted to feel good again,” she admitted (via Baywatch TV). “And I knew an easy way to get that feeling.”

Bleeth, who around that time had left Baywatch for Nash Bridges (1996-2001), said she initially used cocaine casually and socially. However, things took a turn for the worse when she began using the drug on her own, and her addiction began to take a toll on on her work life, physical appearance, and relationships.

“I got a bloody nose on the set a couple of times, but the makeup artist would just hand me a tissue without saying a word and I’d clean it up,” she told Glamour. “If I sounded stuffed up in the morning, I’d give myself a facial or I’d go to the steam room to detoxify my body. And if I was sniffling, my publicist would tell people I had sinus problems, which I do. ‘Yasmine just had an allergic reaction,’ she’d say.”

She continued, “By the end of 1999, I’d stopped looking like myself. I’m a fleshy girl, very curvy and round, but I’d lost my softness. My friends said I looked like an alien, that my eyes were bulging out of my face. I wasn’t anorexic-looking, but instead of being a size 6 with a 29-inch waist, I was 110 pounds and a size 0.”

She went to rehab and got arrested According to Glamour (via Baywatch TV), Bleeth’s addiction continued to intensify. At one point, she said she developed “an infection that had completely eaten out the inside of my nose, leaving it raw and bloody.” She added, “The doctor put me on antibiotics and said, ‘Another couple of months with this infection and it could have gone to your brain and killed you.'”

She continued to use cocaine, and more health scares followed. She even collapsed on the set of a photo shoot before finally agreeing to go to rehab.

Bleeth’s trip to rehab proved futile, and she reportedly began using again shortly after her release. Then, in September 2001, she was arrested after crashing her car into a median in Detroit. According to People, she reached a plea bargain in November that year and pleaded guilty to “possessing less than 25 grams of cocaine and to driving while impaired.” She was sentenced to two years’ probation and 100 hours of community service.

Page Page 1 of 4
Previous article: Clark Gable Was Rumored To Have ‘Date-Raped’ Loretta Young, She Gave Birth To His Baby, And Kept It A Secret
Next Post: 13 Hot Photos Of A Young Halle Berry To Refresh Your Memory