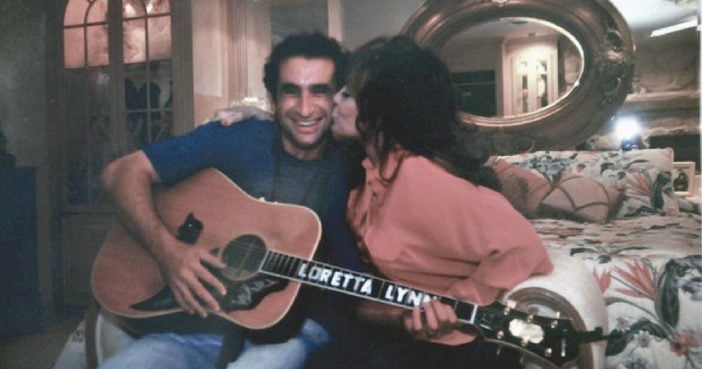 Having worked as a journalist for the past three decades, I have met some of the world’s leading figures in politics, culture, stardom, and music. In the music industry specifically, I have had the pleasure of photographing and interviewing a few icons, including Nora Jones, Hank Williams III, Mick Jagger, Stevie Wonder, Ruben Studdard, Taylor Hicks, and Jerry Garcia. Those stars are as approachable as they are legendary. A decade or so ago, I was contracted to photograph the legendary singer Loretta Lynn for Southern Living magazine.

Having heard about her famous movie and songs, I was thrilled–despite the fact that country music was totally foreign to me. I arrived at her mansion in Waverly, Tennessee with the excitement of a tick on a fat dog. I had the deepest respect for Loretta (we’re on first name basis). I knew of her story and the brave and tumultuous life she lived.

I drove down the driveway for what seemed like a mile of oak trees welcoming me to her manor. When I knocked on the giant front door, her assistant ushered me into a parlor the size of a small football field, decorated with highlights from her career. A huge piano sat in one corner, in another a collection of guitars I was sure had seen the finest of stages.

After her assistant stepped out, I heard this from behind: “WHERE DID THAT TIM GO?”

I turned and froze. There stood Loretta Lynn, with one foot in one of her boots and the other foot halfway in, looking like she had just stepped off a movie set.

I swallowed, then managed to say, “He stepped out.”

I had seen many seventy-something women in my life, but few had her deep beauty and confident splendor. I stepped forward and got on my knees to pull her boot up while she pushed her foot in. She held on to my head as we accomplished the task.

“I like your curly hair,” she said, ruffling her hands through my locks. “Who are you, dear?”

I looked up and said, “I am the photographer with Southern Living,” still holding onto her boot and wanting someone to record this moment.

“Oh my goodness, I am so sorry baby, C’mon back here,” she said as she led me to her gigantic bedroom where more assistants and a couple of make-up artists worked their magic. When she was ready, I photographed her sitting on the edge of her bed.

Before going to take more pictures in the parlor she asked me to sit next to her, then held my hands and gently asked, “Have you ever heard my song?”

Having heard of the famous movie and the song, “Coal Miner’s Daughter,” but never actually having heard it, I had a choice to make: I could lie and say “Yes,” and hopefully get away with it, but instead I admitted not being acquainted with much country music.

“Oh honey . . . Well, we’re gonna fix that right here and right now baby,” she said, smiling big and reaching out her hand. A guitar was slipped in by one of the assistants.

It took me a minute to comprehend what was happening: I was sitting on
Loretta Lynn’s bed and she was going to sing me “Coal Miner’s Daughter?” Is this really happening?

There have been a few instances in my life where words failed to describe my experience. This is one of those rarities. Let me see if I can do it justice now that some time has passed.

She sang as if the entire world was watching, instead of just a star-struck
journalist and a few assistants standing in awe. Her voice was as silvery as it was pleasant, as smoky as it was sexy, and as angelic as it was divine. It hovered around my ears waiting for an invitation, then slid down like drops of honey, totally capturing my attention. At first, I focused on the instrument–the strumming of the guitar was so fine–but then I realized the brilliance of the words. I was amidst a sphere which defied any reality I had previously known, and transcended any dream I dared to entertain.

She finished and gave me a hug, then kissed my cheek and said: “How about if I write a song and name it ‘Karim’?”

Still, in la la land, I nodded with enthusiasm, wondering how some people can be so gifted that their talent reaches deep into your soul, rips it out, then takes it to the moon and back before returning it more understanding–more revering–and more cherishing.