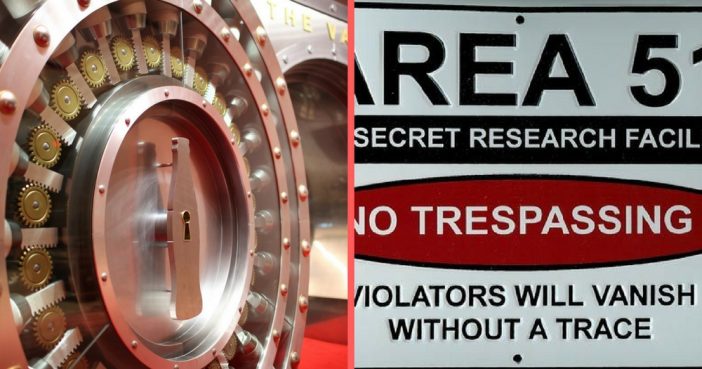 They say ‘Free World’… but the truth is that it’s not as free as you may think. In fact, there are over a dozen places on our planet which you CANNOT gain access to.

From top-secret military bases to exclusive clubs and Armageddon bunkers. In this article, we take a look at the FIFTEEN most restricted places on the surface of our planet.

Let’s check these places out…

One of the most secretive complexes in Europe, and one of the most peculiar looking ones as well. These fascinating and somewhat weird structures provide communication and intelligence support to countries like the UK and the Us.

This complex is so vast; it has been cataloged as the BIGGEST electronic monitoring station on the entire planet.

This one is really strange. It’s something nearly out of a Hollywood cult-like movie. The Bohemian Groove is a –forbidden— 2,700-acre rural location located ‘somewhere’ in California. The land is believed to be owned by a private San Francisco-based arts club called the Bohemian Club.

In the past, presidents such as Richard Nixon and Herbert Hoover have attended. Women are not allowed.

It turns out that every summer, the Bohemian Club hosts a two-week camp in the woods were the most influential people in the world gather. Are they worshiping reptilian gods?

A place you cannot access and a place where you really don’t want to go. Snake Island is a small Island located off the coast of Brazil and contains 4,000 of the DEADLIEST snakes on the planet. Their venom is so powerful that it can MELT human flesh.

The Island has been deemed so dangerous that the Brazilian Government banned visitors from accessing it.Snake Island Is one of the Most Dangerous Places in The World due to the insane amount of golden lance head snakes found there.

Page Page 1 of 5
Previous article: Home Decor Of The 70s – The Technicolor Decade Still Has Much To Offer – Walls With Stories
Next Post: The Royal “Fairytale” Wedding – July 29, 1981