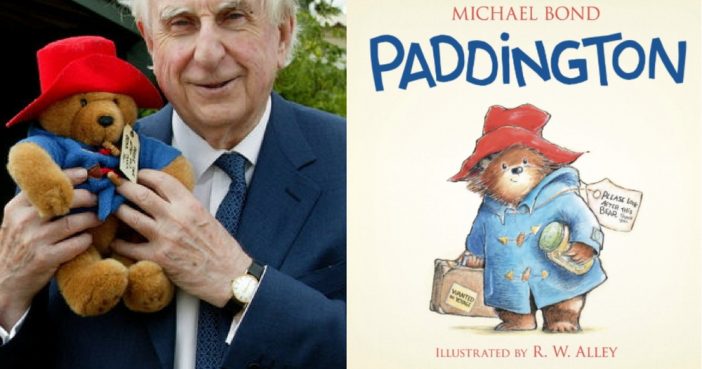 Michael Bond, the creator of beloved children’s character Paddington Bear, has died at the age of 91.

He died at his home on Tuesday following a short illness, a statement from his publisher Harper Collins said.

Bond published his first book, A Bear Called Paddington, in 1958. More than 35 million Paddington books have been sold worldwide.

The character, a marmalade-loving bear from “deepest, darkest Peru” who comes to live in London, went on to inspire a series of books, an animated TV series, and a successful 2014 film.

As well as Paddington, he also created characters including Olga da Polga, A Mouse Called Thursday and a French detective named Monsieur Pamplemousse.

A sequel to the Paddington film will be released later this year.

“So sorry to hear that Michael Bond has departed,” Stephen Fry wrote on Twitter. “He was as kindly, dignified, charming and lovable as the immortal Paddington Bear he gave us.”

Hugh Bonneville, who will be seen in Paddington 2 reprising his role as Mr Brown, said it was “particularly poignant” to learn of Bond’s death on the last day of shooting the sequel.

“In Paddington, Michael created a character whose enthusiasm and optimism has given pleasure to millions across the generations,” he said.

“Michael will be greatly missed by his legions of fans and especially by his wife Sue, his family and of course by his beloved guinea pigs.”

StudioCanal, the producer of the Paddington Films, said it was “deeply saddened” by his passing.

“Very sad to hear Michael Bond has died,” tweeted broadcaster Jeremy Clarkson. “I knew him for 45 years and rarely met anyone kinder or more gentle.”

It was Clarkson’s mother Shirley who made the first Paddington toy figure as a Christmas present for her son.

On his way home from work on Christmas Eve in 1956, Bond spied a lonely teddy bear on the shelf in a shop window and took it home as a stocking filler for his wife.

He called it Paddington because they were living near Paddington Station at the time.

While musing over a typewriter and a blank sheet of paper, he wondered idly what it would be like if an unaccompanied bear turned up at a railway station looking for a home.

Clip below taken from an interview with Thomas Michael Bond, CBE (born 13 January 1926). Originally working as a BBC engineer, he went on to become an internationally acclaimed author for his celebrated Paddington Bear series of books:

Born in Newbury in 1926, Bond began his career at the BBC and later worked on Blue Peter as a cameraman.

He served with the RAF and the army during World War II and began writing in 1945 while stationed in Cairo.

More than 35 million Paddington books have been sold worldwide. The most recent, Paddington’s Finest Hour, was published in April.

Ann-Janine Murtagh, executive publisher at HarperCollins Children’s Books, remembered the author as “a true gentleman, a bon viveur, the most entertaining company and the most enchanting of writers”.

“He will be forever remembered for his creation of the iconic Paddington, with his duffle coat and wellington boots, which touched my own heart as a child and will live on in the hearts of future generations.”

Speaking to the BBC in 2014, Bond revealed he had created Paddington “to please myself” and that he would “carry on writing the books as long as I can”.

He is survived by wife Sue, their children Karen and Anthony, and four grandchildren.

Monkey Business: Are You Curious About George?

Previous article: The Mamas and Papas, Jefferson Airplane And The Steve Miller Band Reunite For This Anniversary
Next Post: Can You Answer These 10 Classic Riddles? (2)