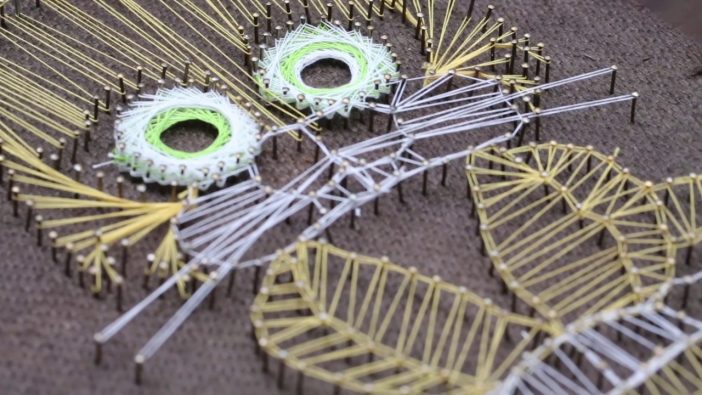 String art, or pin and thread art, is characterized by an arrangement of colored thread strung between points to form geometric patterns or representational designs such as a ship’s sails, sometimes with other artist material comprising the remainder of the work. Thread, wire, or string is wound around a grid of nails hammered into a velvet-covered wooden board. Though straight lines are formed by the string, the slightly different angles and metric positions at which strings intersect gives the appearance of Bézier curves (as in the mathematical concept of envelope of a family of straight lines). Quadratic Bézier curve are obtained from strings based on two intersecting segments. Other forms of string art include Spirelli, which is used for card making and scrapbooking, and curve stitching, in which string is stitched through holes.

String art has its origins in the ‘curve stitch’ activities invented by Mary Everest Boole at the end of the 19th century to make mathematical ideas more accessible to children.[1] It was popularized as a decorative craft in the late 1960s through kits and books.

Fun activity to do with the kids… Just watch your fingers!