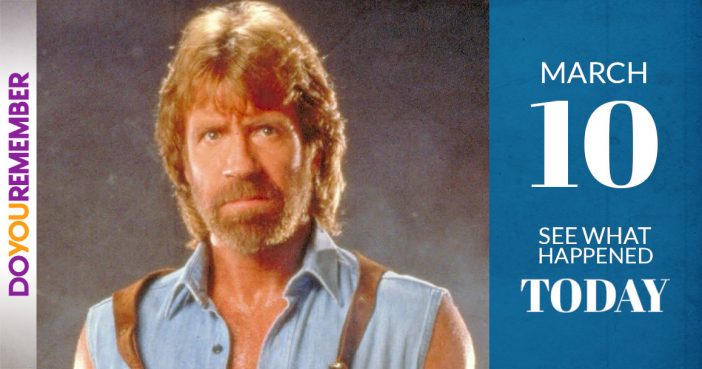 Let’s rewind the clock and see what March 10 has to offer. From Birthdays like Chuck Norris, to recording “Sound of Silence”, what a day!

1989 – The Adventures of Baron Munchausen

1956 –  The incredible Platters spent an 11th week at #1 on the R&B chart with their classic “The Great Pretender”.

1958 –  Most would not know this artist until a year later, but on this date, Brook Benton first appeared on the chart with his debut single “A Million Years From Nowhere”.

1961 –  Songwriter Jeff Barry signed a contract with Trinity Music.  With wife Ellie Greenwich, Barry became one of The Top Songwriters of the Rock Era*, with songs like “Be My Baby” for the Ronettes, “Chapel Of Love” by the Dixie Cups and “River Deep, Mountain High”.

1964 – Paul Simon and Art Garfunkel recorded the acoustic “The Sounds Of Silence” at Columbia Records Studios in New York City. Later, the record company would add electric guitar, bass and drums, without the knowledge of either performer, and release the song as a single.

1973 – Tammy Wynette tops the Billboard country singles chart with “‘Til I Get It Right”.

1973 –  Roberta Flack was untouchable at this point as “Killing Me Softly With His Song” remained at #1 for a third week.

1975 – Elvis Presley began what would prove to be his final recording session at RCA studios in Hollywood, California.

1979 –  Spirits Having Flown by the Bee Gees was #1 on the Album chart once again.  Rod Stewart’s Blondes Have More Fun came in second.

1984 –  Christine McVie of Fleetwood Mac fame had a solo #1 on the Adult Contemporary chart with “Got A Hold On Me”.

1984 –  “Jump” by Van Halen held on to #1 for a third week with Cyndi Lauper moving up to challenge with “Girls Just Want To Have Fun”.

Thriller by Michael Jackson broke the Rock Era record of 31 weeks at #1 on the Album chart, previously held by the stellar Rumours from Fleetwood Mac.  And Michael wasn’t done yet.

1990 –  Forever Your Girl by Paula Abdul remained the #1 album for the sixth week with Janet Jackson’s Rhythm Nation 1814 once again unable to top it.

Taylor Dayne scored her sixth straight Top 10 Out of the Gate* with “Love Will Lead You Back”.

1998 – All the Pain Money Can Buy, the second album by American pop-rock band Fastball,  is released on Hollywood Records.

1955 – The last broadcast of “The Silver Eagle” was heard on radio.

1963 – The TV series Walt Disney’s Wonderful World of Color airs “The Horse With the Flying Tail.”

1965 – Walter Matthau and Art Carney opened in “The Odd Couple”. It later became a hit on television.

1917 – A deadly earthquake magnitude of 6.3 at Long Beach, California, kills an estimated 140 people

1938 – Disney is twice awarded at the 1937 Academy Awards presented at the Biltmore Hotel in Los Angeles. The Disney/RKO cartoon short The Old Mill (Short Subjects, Cartoon) wins an Academy Award, and Walt Disney Productions takes home an Oscar (Scientific or Technical, Class II)) for the design and use of its unqiue multiplane camera.

1948 – Disney’s Bambi is awarded 2 Special Golden Globe Awards “for furthering the influence of the screen” and “for the Hindustani version of the movie.”

1953 – Africa USA, a wildlife tourist attraction in Boca Raton, Florida, opens its  doors to the public. A unique theme park (before its time), Walt Disney himself will frequently visit and even consider purchasing the 300-acre site. (Africa USA will close in September 1961.)

1955 – U.S. President Eisenhower calls Walt Disney to congratulate him on the previous night’s TV broadcast of “Man in Space.” Eisenhower asks for a copy of it to show the generals in the Pentagon.

1979  – James Brown appears at the Grand Ole Opry in Nashville, Tennessee, where he performs Your Cheatin’ Heart, Tennessee Waltz and the very un-Country Papa’s Got A Brand New Bag.

1985 – Today is General Electric’s last day as corporate sponsor of Disney World’s Carousel of Progress. GE’s association with the attraction goes all the way back to the 1964-65 New York World’s Fair.

1994 – The Pentagon has introduced new smoking policies in the Pacific. For example, smoking is not allowed on military bases such as the ones located in Japan (including on the Okinawan Island) and Korea.

2000  – Vince Gill and Amy Grant get married in Nashville in front of about 450 guests. Included in the wedding party are their children from previous marriages – Gill’s daughter Jenny, 17, and Grant’s children Matthew, 12, Millie, 10, and Sarah, 7.