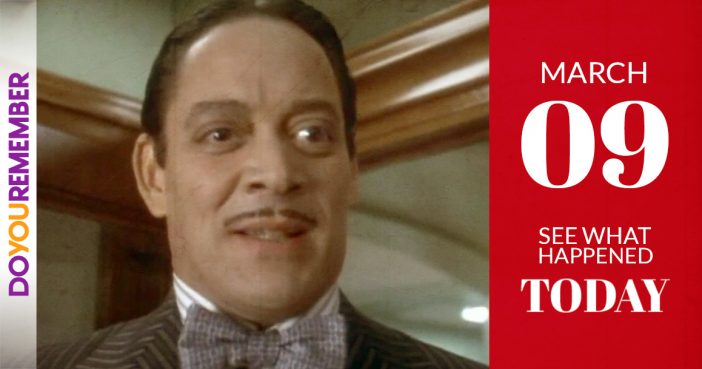 1963 –  “Rhythm Of The Rain” by the Cascades continued to be the song to beat on the Easy Listening chart.

1974 – Bob Dylan put together a fourth week at #1 on the Album chart with Planet Waves.

1974 – Two new songs graced the Top 10 – the husband and wife team of Carly Simon & James Taylor with “Mockingbird” and John Denver’s new one–Sunshine On My Shoulders”.

1981 – Robert Plant and his new band the Honeydrippers debuted at the Stourbridge Wine Bar in Stourbridge, West Midlands, England.

1985 – REO Speedwagon earned a second career #1 with “Can’t Fight This Feeling”, bumping off Wham’s “Careless Whisper”, which had been there for three weeks.

1985 – For the fifth week, “Careless Whisper” by Wham! topped the Adult Contemporary chart.

1991 – The Clash rose to #1 in the U.K. with their song that they first released in 1982–“Should I Stay Or Should I Go”. The song picked up new popularity due to a television advertisement.

1991 – Mariah Carey made it three straight #1’s on the Popular chart to begin her career with “Someday”.

1993 – Michael Jackson was named Humanitarian of the Year at the Soul Train Music Awards.

1996 – Mariah Carey released the single “Always Be My Baby”.

1955 – On ABC-TV, Disneyland airs “Man in Space,” the first of a 3-part series about space travel. The show features Walt Disney, animator Ward Kimball (the director of the series), and scientists Willy Ley, Heinz Haber, and Wernher Von Braun (who will later be one of the leaders in the American space program).

1975 – NBC-TV airs The Wonderful World of Disney episode “The Footloose Goose.” Narrated by Andrew Duggan, a pinioned trout-farm goose takes a wild gander for her mate, but when he’s blown off course in a storm, and then winged, he has to make his way back to her on foot.

1977 – The Jacksons’ television show aired for the final time on CBS.

1979 – The Heroes of Rock & Roll, featuring clips of Elvis Presley, the Beatles and Buddy Holly, among others, was shown on ABC-TV

1980 – Disney’s made-for-TV movie The Kids Who Knew Too Much airs for the first time. Three young model-building aficionados (played by Rad Daly, Dana Hill and Christopher Holloway) team up with an ace reporter (portrayed by Sharon Gless), who is investigating a murder. Everyone is plunged into peril when it is discover that the murder was committed to hush up a major political conspiracy!

2001 – Disney Channel’s original movie, The Luck of the Irish airs. A teenager must battle for a gold charm to keep his family from being controlled by an evil leprechaun. (It will be the network’s highest-rated original movie in the past three years.)

1949 – The first all-electric dining car was placed in service on the Illinois Central Railroad.

1968 – At this year’s Grammy Awards in Los Angeles, 5th Dimension’s “Up Up And Away” wins Record of the Year (as well as Best Vocal Group Performance), while the Beatles’ Sgt. Pepper’s Lonely Hearts Club Band album takes home Album of the Year, Best Contemporary Album, Best Engineered Record and Best Album Cover.

1976 – For the second time, The Who’s Keith Moon collapses while performing at a show, this time at the Boston Garden. Though drug and alcohol abuse are again the culprit, singer Roger Daltrey tells the crowd Moon is suffering from the flu. The gig ends, but the group plays another one for ticketholders on April 1.

1986 – U.S. Navy divers found the crew compartment of the space shuttle Challenger along with the remains of the astronauts.

1989 – In the U.S., a strike forced Eastern Airlines into bankruptcy.