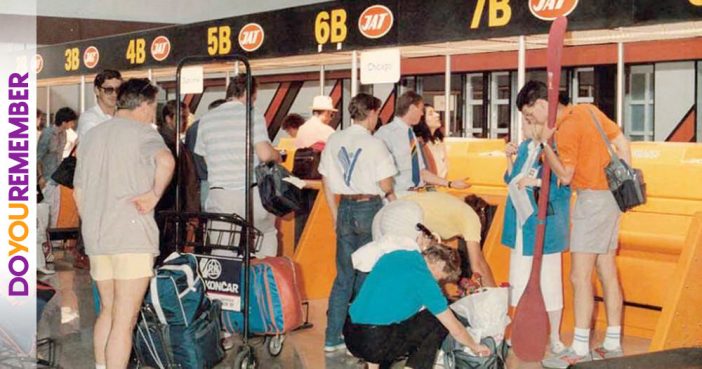 Hollywood has always taken certain liberties when it comes to showing airports and air travel in the movies. But we here at DoYouRemember have our own opinions on some of the crazy things we’ve seen onscreen and why they probably wouldn’t fly today.

“Liar Liar” – You’re desperate to stop a loved one from flying off so you stow away inside someone’s baggage to bypass security, and then proceed to hijack a set of airplane stairs on the tarmac to aid your pursuit. It may have worked for Jim Carrey in this scene, but odds are that if you were to try that today you’d end up with taser marks on your behind and on a permanent “no fly list.”

“Meet The Parents” – Anybody who has ever tried to cram a carry-on bag into a plane’s undersized overhead luggage compartment can relate to Ben Stiller’s frustration in this scene. All the poor guy wants to do is put his belongings away and forget the miserable trip he’s had. Unfortunately, flight attendants don’t take kindly to confrontational passengers, especially those who use the word “bomb” on a plane.

“Seinfeld’s Airport Episode” – Running away from airport security is always a bad idea. In fact, with today’s wave of security and TSA workers, the odds are better of a passenger landing a plane on Mars than making a clean getaway from the S.W.A.T. teams ready to act should any crazed individuals decide to pull a Cosmo Kramer.

“Twilight Zone’s ‘Nightmare at 20,000 Feet`” – Traveling with anxiety used to be much more difficult for passengers than it is today. A few decades ago, an unruly passenger who thought he saw a man on the wing of his plane at 20,000 feet could be calmed with a stiff drink, a seat change or a few pills. But in this age of armed sky marshals, a more likely end to this situation would’ve been the passenger being hogtied or bound with restraints in less time than it takes to cue up the in-flight movie.

“Air Force One” – Several U.S. Presidents have had the honor of serving in some branch of the military prior to their landing in office, but what are the odds that any of them could almost single-handedly thwart a group of machine gun-toting terrorists from taking over Air Force One? We’re betting the background checks would root out these evildoers before they got on board  Although, if the Salahis could crash a state dinner, we suppose anything is possible.

YOU MIGHT ALSO WANT TO READ: Airplane Food Is Coming Back To Flight, Making Model Planes, Ships, Cars & Tanks