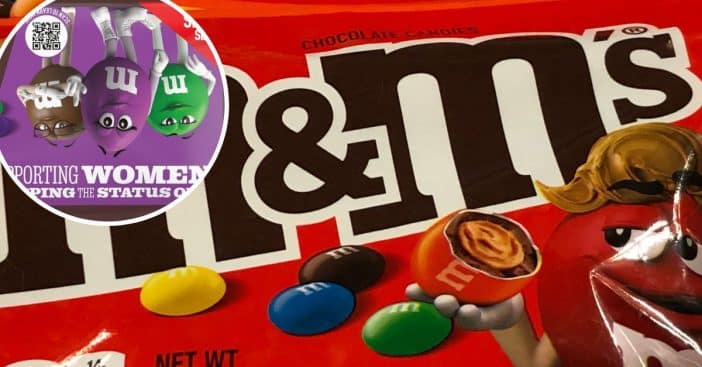 M&M’s latest packaging features only the female characters, including the newest, Purple. The limited edition all-female pack includes Purple, Brown, and Green, who are upside-down on the package. It says the characters aim to “celebrate women everywhere who are flipping the status quo.”

Purple is the newest M&M character in a decade and is reportedly a purple peanut M&M. A press release read, “The M&M’S brand is on a mission to use the power of fun to create purposeful connections, as we work to create a world where everyone feels they belong.”

Consumers can grab the new packaging in three options: milk chocolate, peanut, and peanut butter. A portion of the profits will reportedly go to organizations such as She Is The Music and We Are Moving the Needle, which support and empower women.

While some people love the new packaging, others found issues with it. Fox anchor Martha MacCallum said, “If this is what you need for validation, an M&M that is the color that you think is associated with feminism, then I’m worried about you. I think that makes China say, ‘Oh, good, keep focusing on that. Keep focusing on giving people their own color M&M’S while we take over all of the mineral deposits in the entire world.’”

Previously, some people did not like the changes that M&M’s made to the characters, including the modernization of the Green M&M. Mars, the company that sells M&M’s, responded, “The characters … are continuously evolving to reflect the times that we’re living in.” They hope consumers will “get to know our characters for much more than their footwear.”

Click for next Article
Previous article: The Cast Of ‘Emergency!’ Then And Now 2023
Next Post: The Real Reason Dolly Parton Always Wears Gloves