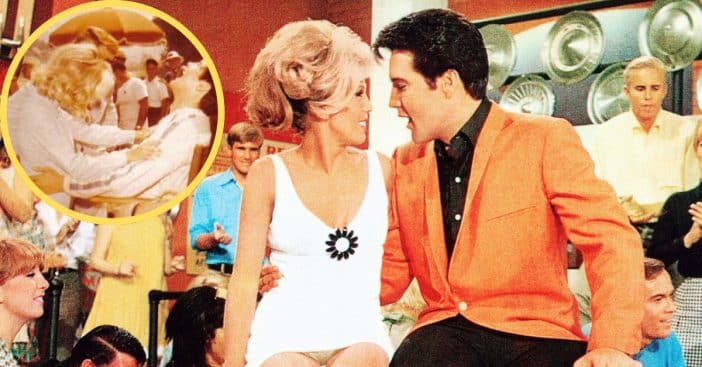 January 8 would have marked Elvis Presley‘s 88th birthday. Tributes have been pouring in from family, fans, and those who knew him, including Nancy Sinatra, his co-star in 1968’s Speedway. On social media, Nancy, 82, shared her favorite photo of herself and the King.

Fame colors every aspect of Nancy’s life, as the daughter of Frank Sinatra and Nancy Barbato. She taught fans that “These Boots Are Made for Walkin'” and played a racecar driver alongside Elvis in Speedway. This would be her last film role – and certainly a formative one!

I'm thinking of my dear friend on his birthday and wishing he were still here to celebrate with us.

This is my favorite picture of Elvis and me. It shows the fun and affection we shared. Oh, God, how I miss him. pic.twitter.com/jxewCCOytf

On January 8, what would have been birthday 88 for Elvis, Nancy took to Twitter to share a throwback photo. It shows her and the King holding onto each other. Even through the sepia filter, it’s easy to tell it was a fun time, as Elvis even has his head thrown back in apparent mirth. Nancy, with her head of blonde hair, is holding on with care.

RELATED: Priscilla Presley Remembers Elvis On What Would Have Been His 88th Birthday

“I’m thinking of my dear friend on his birthday and wishing he were still here to celebrate with us,” she captioned the post. “This is my favorite picture of Elvis and me. It shows the fun and affection we shared. Oh, God, how I miss him.”

Racing down the speedway

In a follow-up comment, Nancy admits she wishes she could remember what was said that made them all, especially Elvis, laugh so hard. She credits fellow castmate Bill Bixby, who played Kenny Donford, as the likely culprit, saying, “Knowing Bix, he probably said something that cracked us up.” That’s more than what Bixby’s character would have done, since as a manager, Donford mishandled the money earned by Elvis’s character Steve Grayson, driving much of Speedway‘s plot.

As for Nancy, she was the accidental love interest Susan Jacks, an IRS agent originally intent on keeping tabs on Steve’s financial situation, only for romance to completely change the game. It received mixed reviews, about as much praise as criticism, but seems to have formed a lot of pleasant memories for those involved.

Who among Elvis Presley’s many lovers was “the one?” Take a look at their romances in the video below.

Click for next Article
Previous article: Priscilla Presley Remembers Elvis On What Would Have Been His 88th Birthday
Next Post: The Cast Of ‘Step By Step’ Then And Now 2023