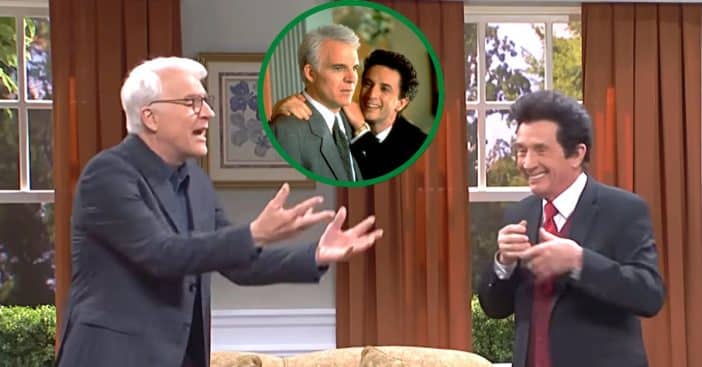 The sound of wedding bells is in the air – much to the chagrin, once again, George Banks. Fans of 1991’s Father of The Bride were treated to a nostalgic reunion of sorts when Saturday Night Live saw several cast members reprise their roles, including Steve Martin and Martin Short.

Martin has played an architect, a football coach, an architect again, and a very irate dad contending with his daughter’s impending wedding – and all the rituals that come with it. Luckily, his character George is aided by the most intelligible wedding planner Franck. But they were just part of the big SNL sequel.

On Saturday, December 10, both Martin and Short took the SNL stage as father and wedding planner. The skit opens with a familiar house and shows George staring wistfully out the window, barely accepting that his daughter is getting married – again. Once again, Franck and his assistant were recruited to help out for a wedding that’s numbered past half a dozen.

The cameos continued with a surprise visit from Matty, Annie’s little brother, played by Kieran Culkin who, the sketch reminds viewers, is now in Succession. Where original cast members are absent, the SNL team filled in with creative flair.

Only reunions in the building

There were a few layers to this sketch, as it was a reunion twice over. Selena Gomez featured prominently as the very expensive entertainer Franck recruited, giving Martin and Short a chance to not only reenact their Father of the Bride dynamics, but they got to reunite with their colleague Gomez from Only Murders in the Building, a series that hit Hulu in 2021 and has gone on to receive critical acclaim. In fact, it’s already been approved for a third season!

But this is far from Martin and Short’s first time working together. They reminisce on such early on in that SNL episode, in between roasting each other in eulogies they wrote for one another. Check out the Father of the Bride sketch on SNL in the video below! Keep in mind though, it gets a bit NSFW at some parts!

Click for next Article
Previous article: Prince Harry Claims Elton John Refused To Sing “Candle In The Wind” On Anniversary Of Princess Diana’s Death
Next Post: Apple Martin Has Striking Resemblance To Mother, Gwyneth Paltrow, In Photos Together