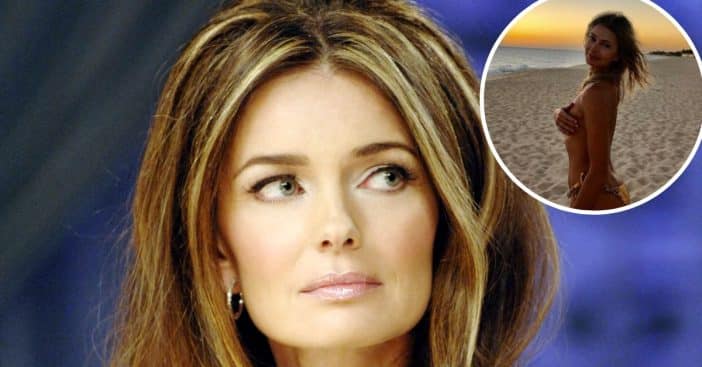 57-year-old Paulina Porizkova shared a topless photo from a previous vacation where she says she discovered her “superpower.” In the photo, Paulina stands in a bikini bottom, with her hands covering herself, standing in front of an ocean sunset.

She captioned the spicy photo, “Four years ago, I was on a vacation with friends in St Maarten. We were lounging on the beach, and I brought up the topic of superpowers. What were our real life superpowers? What did we think of our own and those of each other? We didn’t get around to mine before I went and had a dip in the ocean, and when I came back, my two girlfriends were excited. “We nailed your superpower”, they exclaimed. “You make other women feel beautiful”. I was – stunned. I had often been accused of the opposite. My image, I had been told, had been making women feel bad about themselves for decades.”

Paulina Porizkova shares a topless photo with an inspiring message

She continued, “But what my girlfriends were saying, was that my presence made them feel beautiful. Looking at me made women feel bad, but hearing me made them feel good. Everyone always thinks I get nothing but compliments all day long. So my friends and lovers, making the assumption I know and hear it all the time, very rarely give me one. I understand how it feels to be told by someone that you are beautiful to them. And the opposite.”

RELATED: Paulina Porizkova Didn’t Know How To Go On After Ric Ocasek’s Death

Her post concludes, “So I make a point of complimenting others. Is it shallow? Is it superficial? Maybe. But who cares when the result is a heartfelt smile and a little extra bounce in the step. Every woman is beautiful in her own and unique way. Why not celebrate it? This pic is from that vacation 4 years ago. #betweenjloandbettywhite #everywomanisbeautiful #greypride #feelbeautiful #womensupportingwomen”

Paulina has had a rough couple of years and seems to be recovering from the hard times. Her ex-husband, Cars frontman Ric Ocasek passed away and didn’t leave her anything behind in his will. She admitted that she was devastated because she took care of him until the end and they remained good friends. Paulina recently shared that she had no money to even buy groceries after his death for a while. Now, she’s back on her feet and starting to enjoy life again, according to her Instagram posts.