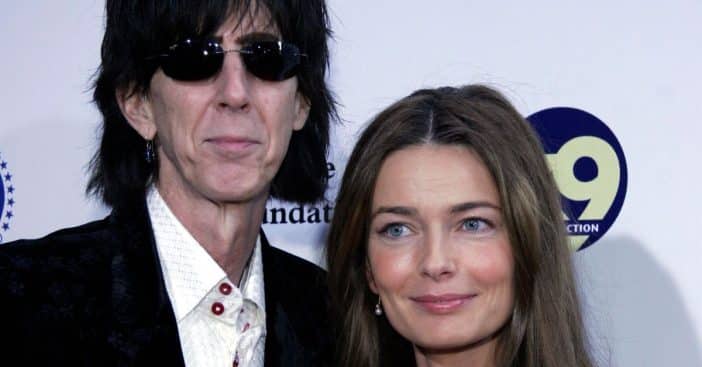 Paulina Porizkova is opening up about her late ex-husband Ric Ocasek and the rocky start to their relationship. Paulina and Ric met in 1984 on the set of the music video for “Drive.” She was just 19 years old while he was around 40. She admitted that they started kissing and she playfully asked him to tell her a secret and he admitted that he had a wife.

Paulina said she was young and naive at the time and broke up with her then-boyfriend, expecting Ric to also leave his wife. However, she realized a few months later that he was still with his wife and had children.

She admitted, “I was in too deep at the point. And when he said he needed time because there were two small children involved I went, ‘He’s such a good dad.’ It never really dawned on me that he had all the lies that had started as soon as we met.” They dated for three years secretly before he left his wife.

RELATED: Paulina Porizkova Didn’t Know How To Go On After Ric Ocasek’s Death

Ultimately, Ric and Paulina married in 1989 but decided to separate in 2018. She credited a lot of their split to his control issues and said that he was unwilling to work on their marriage. Ric passed away in 2019 and Paulina was by his side. They still lived together after the split and she took care of him. Paulina was shocked and said she felt betrayed when she learned he had cut her out of his will.

After Ric’s death, Paulina said she went through a dark time and revealed that she was single, broke, and going through menopause. Now, she’s 57 years old and said she’s open to dating and overall feeling better about life and love.