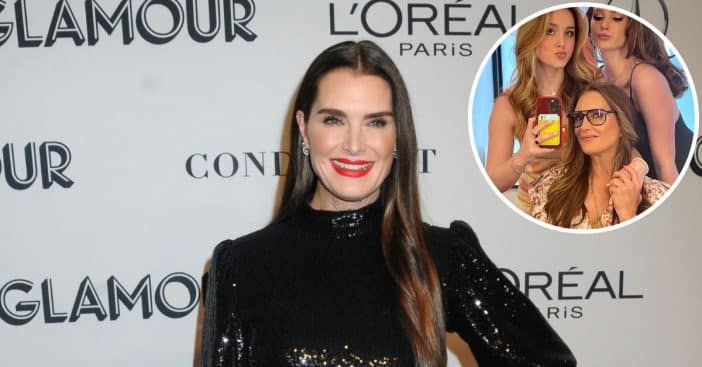 Brooke Shields frequently shares photos of herself and her daughters on Instagram, to the delight of her fans and followers. Brooke and her husband, Chris Henchy, welcomed Rowan and Grier in 2003 and 2006, respectively. Both girls were not in the spotlight as children, but now that they are all grown up, they have been out and about along with their celebrity mom.

The 57-year-old has built a great bond with her children. In 2018, she praised one of the characteristics her girls inherited from her. “My daughters are so much more mature than I was, so much more confident in their own bodies,” she revealed to Porter. “They have the same stubbornness and strength that I do, but are more well-adjusted. I am jealous as all hell about that. But, of course, I created it.”

The mom-daughter trio was at the launch event for Fashionphile in New York City in beautiful outfits. Grier revealed that she hoped to become a broadcast journalist and led a Q&A session. Brooke also gave Rowan some career advice, asking her to “find the vocation that she (Rowan) absolutely loves.”

Both girls support their mom

Grier wore a black and white pantsuit with hot pink sunglasses at her mom’s Role Modeling art exhibit in New York City in collaboration with Tara Lewis. Brooke posed with her second daughter in a neon orange suit in front of some artwork.

The Role Modeling Art Exhibit included some paintings by Tara Lewis appreciating Brooke’s accomplishments. Some of the paintings included Rowan and Grier, too.

The family of four makes sure to spend time together and post cute family pics too. Brooke shared a photo of herself and her husband, Chris Henchy, with the kids on the red carpet at the premiere of Impractical Jokers: The Movie in 2020.

Later that year, the family also hung out by a poolside for some bonding time, and Brooke took to her snap to share a photo with the caption: “Thankful for them.” Another picture was taken in Rowan’s dorm room at Wake Forest University in August when the family dropped her off for college.

Brooke Attributes Her Body Confidence To Her Teen Daughters

In a recent interview, Brooke shared how her daughters have helped her embrace her body better, commending their own body confidence.

“Their body image is so much better,” Brooke told Access Daily. “I mean, they love it and move it and tell you to look at it and all the movements and the clothing, which I can’t even really call clothing. I was the hiding one and, you know, back out of rooms and just don’t show your curves and it was such a weird thing, because my daughters would actually say to me, ‘Mom, you’ve got a body, you should just embrace it.'”

“When your daughter teaches you something like that, and when you’ve been in an industry that I’ve been in forever, it just really is unbelievably impacting,” she added.

Click for next Article
Previous article: Paulina Porizkova Shares Spicy Photo In Hopes Of Inspiring Other Women
Next Post: All Ozzy Osbourne Wants To Do Is Get Back On The Stage Amid Health Issues