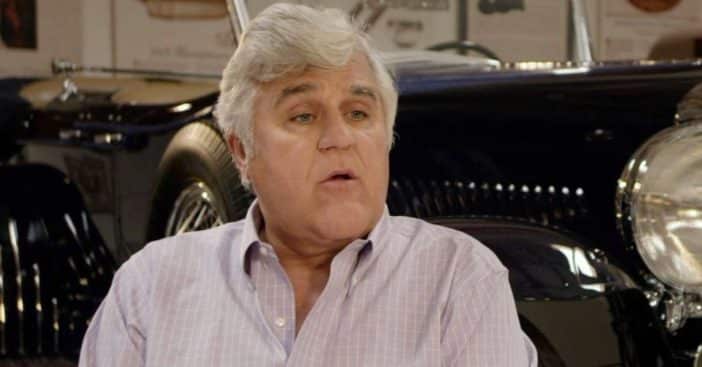 In a new interview, Jay Leno is opening up about the gasoline accident that left him with severe burns on his face and chest. The 72-year-old said that he was working on an antique 1907 car with his friend Dave Killackey. Jay has a love of antique cars, detailed in his show Jay Leno’s Garage.

He explained, “The fuel line was clogged so I was underneath it. It sounded clogged and I said, ‘Blow some air through the line,’ and so he did. And suddenly, boom, I got a face full of gas. And then the pilot light jumped and my face caught on fire.”

He told his friend and at first, he didn’t see the severity of the accident. So he added, “I said, ‘No, Dave, I’m on fire.’ And then, ‘Oh, my God.’ Dave, my friend, pulled me out and jumped on top of me and kind of smothered the fire.” Jay was taken to the hospital and later to the Grossman Burn Center, where he spent several weeks in surgery and recovery.

At first, Jay downplayed the seriousness of his injuries but Dr. Peter Grossman gave a press conference that shared more about Jay’s recovery. Jay suffered from second-degree and some third-degree burns but is expected to make a full recovery.

Several weeks later, Jay is already out and about, doing interviews and back on the comedy club circuit. He certainly isn’t letting the accident slow him down, nor does he say he will stop working on his cars.

Click for next Article
Previous article: Ozzy Osbourne Admits That He Can’t Walk Much Now After Surgery
Next Post: ‘Wheel Of Fortune’ Fans Spot A Naughty Puzzle In A Holiday Episode