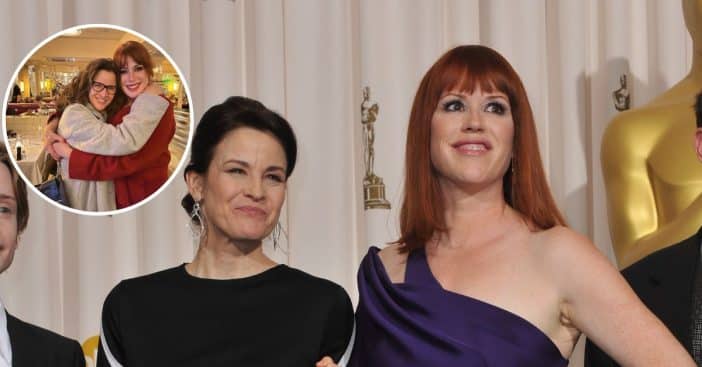 The Breakfast Club co-stars, Ally Sheedy and Molly Ringwald had a recent catch-up in New York City. Ringwald shared a warm Instagram photo of her spending time with Sheedy, at Cafe Luxembourg, with the caption, “Early Christmas present-dinner with my psychic sister Ally.”

The 54-year-old Ringwald donned a red coat with bright red lipstick to their mini-reunion, and Sheedy, 60, wore a gray coat. Both ladies held each other in a friendly embrace inside the Cafe in Manhattan, NY.

It has been 38 years since the release of writer-director John Hughes’ The Breakfast Club. The coming-of-age classic features high school students from different walks of life who come together to spend time in detention. In the movie, Ringwald plays the popular girl, Claire, while Sheedy starred as Allison, the social outcast.

Other co-actors in the movie include Judd Nelson, who plays John the rebel; Anthony Michael Hall, as Brian the brainy; and Emilio Estevez, playing Andrew the jock. Each student comes from different background and has contrasting experiences, so they share their story while in detention under their strict principal, played by Paul Gleason. After much time spent together, it is apparent that things will not stay the same at Shermer High School.

Life After ‘The Breakfast Club’

Ringwald told PEOPLE in a 2015 interview that starring in The Breakfast Club was “a great experience.”

“I was really loving the work that I was doing,” Ringwald said during the movie’s 30th anniversary. “Director John Hughes and I had a symbiotic, respectful relationship. I didn’t know I’d be talking about it 30 years later! But it was a great experience.”

Ringwald also went on to act in other high school films like Sixteen Candles and Pretty in Pink. Sheedy, who also starred in St. Elmo’s Fire, now teaches an acting class at City College of New York alongside her TV roles. On being a celebrity and a teacher, Sheedy says her students sometimes recognize her.

“Some of them Google me, or they have a great filmography in their head and they’ve seen what I’ve done. I’m very open to talking about my experiences,” Sheedy said to PEOPLE. “And I have an affinity for them so much because they are the age I was when I was working. I’m telling them everything I wish I knew!”

In the ’80s, Sheedy was easily identified alongside her colleagues as part of Hollywood’s “brat-pack.” “It was a different world in the ’80s. But as far as learning how to handle a set, it hasn’t changed that much,” Sheedy said regarding her acting career over the years. “I’m always happy to talk about ‘The Breakfast Club’,” she concluded. “I still really love it!”

Click for next Article
Previous article: John Travolta Shares Tribute To “One Of The Most Special Relationships” With Kirstie Alley
Next Post: Kirstie Alley: Enjoy Scrapbook Memories Of Her Movie And TV Career