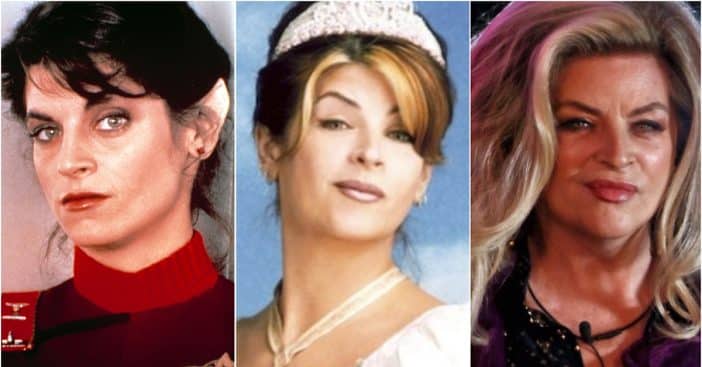 With news of the death of Kirstie Alley of cancer at age 71, came a need to look back at her life and career through the means by which we best got to know her: the characters she played over the past 40 years, ranging from her debut in the second Star Trek movie, The Wrath of Khan, in 1982 all the way through her hysterical reveal on FOX’s The Masked Singer.

What follows, mostly in the form of photos, is a look back at the woman, who at an early awards show, thanked ex-husband Parker Stevenson for continuing to give her “the big one.”

Kirstie made her big screen debut as the Vulcan/Romulan hybrid Lt. Saavik in Star Trek II: The Wrath of Khan. Prior to Star Trek, she appeared in the TV sci-fi comedy Quark (1979) and on the game show, Match Game.

From the espionage series Masquerade are, from left, Kirstie Alley, Rod Taylor, and Greg Evigan. In 1983 Kirstie also appeared in the TV movie Highway Honeys and an episode of The Love Boat.

A Bunny’s Tale reveals what went on inside the Playboy clubs; it’s based on the memoir by Gloria Steinem.

North and South, 1985 miniseries based on the trilogy of novels by John Jakes. The same year Kirstie guest starred in two episodes of The Hitchhiker.

Nobody knew what would happen to the sitcom Cheers when Shelley Long departed, but salvation came in the form of Kirstie, who played bar manager Rebecca Howe. Her chemistry with Ted Danson pumped a whole new life into the show.

The romantic drama Infidelity stars Kirstie alongside Lee Horsley, who at the time was starring in the series Matt Houston.

Kirstie and Tom Berenger were among the stars of the thriller Shoot to Kill, which also stars the late Sidney Poitier.

Patrick Dempsey (look how young he is in this photo!) was Kirstie’s romantic lead in Loverboy.

This time it was Quantum Leap star Scott Bakula starring alongside Kirstie and Jamie Gertz. Like Summer School, this was directed by Carl Reiner.

Definitely a more dramatic turn for Kirstie as she plays a mother dealing with an autistic teenage son. Above are Kirstie with The Cosby Show‘s Phylicia Rashad and Michael Goorjian.

A return to her sci-fi roots in the remake Village of the Damned, that not only stars Kirstie and Star Wars‘ Mark Hamill, but the late Superman actor Christopher Reeve as well. Directed by horror legend John Carpenter.

Dual parts for Kirstie, providing her voice for the characters of Annie, Bird and Duck; with Ross Malinger as the voice of Peter.

Suddenly deals with what happens when people abruptly find themselves paraplegics. Kirstie costars with Jason Bieghe. In 1996 she also starred in the TV movie Radiant City and the theatrical film Sticks & Stones.

Airing as part of The Wonderful World of Disney was Toothless, starring Kirstie as the Tooth Fairy alongside Lynn Redgrave and Daryl “Chill” Mitchell.

Based on the novel by The Godfather‘s Mario Puzo, The Last Don was a television miniseries that spawned a sequel, The Last Don II, a year later. Above Kirstie is with Jason Isaacs.

Deconstructing Harry is a black comedy written, directed by Woody Allen, who co-stars with Kirstie.

Big screen comedy For Richer or Poorer — co-starring Kirstie with Tim Allen — looks at a couple who decided to live a simpler life. In 1997, Kirstie also appeared on an episode of the series Ink.

Kirstie headlined this sitcom about the owner of a Victoria Secrets-like lingerie company. The show had a three-season run for a total of 66 episodes.

Dancing with the Stars: All Stars (2012 Competition Series)

Kirstie was one of the participants in 2012’s Dancing with the Stars: All Stars, for which she ended up being a runner-up after 10 weeks of shows. The TV movie The Manzanis was aired that same year.

Exposing the world of baby trafficking is the focus of this television movie in which Kirstie plays Carla Huxley.

This sitcom focuses on a Broadway actress whose life is rocked when her teenage son, who she gave up for adoption at birth, returns to her life. The show also stars Seinfeld‘s Michael Richards and Kirstie’s former Cheers co-star Rhea Perlman. Kirstie also played the role on the sitcom Hot in Cleveland. In 2013, Kirstie also starred in the film Syrup, a comedy drama. In 2015 she had a small role in the film Accidental Love, and guest starred on The Middle. In 2016, she guest starred in Flaked and had a regular role in season 2 of Scream Queens. Additionally, she appeared on an episode of The Goldbergs in 2019.

Given her wacky sense of humor, it somehow seems appropriate that the last time the audience would get to enjoy Kirstie’s antics would be in her big reveal as part of The Masked Singer in 2022.

Click for next Article
Previous article: Ally Sheedy, Molly Ringwald Of ‘The Breakfast Club’ Have ‘Early Christmas Present’ Reunion
Next Post: Dolly Parton To Cover Prince And The Rolling Stones On Upcoming Album