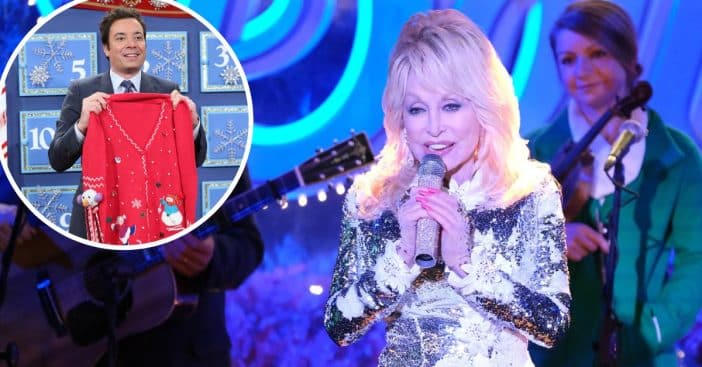 Dolly Parton and late-night television host Jimmy Fallon teamed up for a new holiday song! Dolly appeared on The Tonight Show with Jimmy Fallon to release the new track and joked about the inspiration behind the adorable song.

The new song is called “Almost Too Early for Christmas” and came with an animated lyric video. Cartoon versions of Jimmy and Dolly go from the fall season and Halloween to celebrating Christmas in early November.

Some of the lyrics read, “It’s almost too early for Christmas / Too soon to be singing this song / There’s still Halloween decorations / And haters will say that it’s wrong. Let’s turn on the lights for Mariah / Tell Rudolph to shine up his nose / It’s almost too early for Christmas / But why don’t we see how it goes?” The song celebrates the lively debate between folks who think that Christmas should be celebrated after Thanksgiving and those who start celebrating right after Halloween.

Jimmy said, “People have that debate after Thanksgiving, they have that debate where they go, ‘Oh, can we listen to holiday music? Can we listen to Christmas music? Is it too early? Can we put on Mariah Carey now?’ I say, ‘Yeah, if it’s good, you should.’ So I thought it would be kind of fun if I put out a song and released it around Halloween.”

Dolly is also gearing up to host another holiday special called Dolly Parton’s Mountain Magic Christmas, which is basically a musical about the making of a TV special at Dollywood. Jimmy is set to appear in the special as well as Willie Nelson, Miley Cyrus, and more.

Listen to “Almost Too Early for Christmas” below:

Click for next Article
Previous article: Holiday Flavors Are Coming To Wendy’s Frosty In Time For The Chilly Weather
Next Post: Kelly Ripa And Mark Consuelos Visit Lola As She Studies Abroad In London