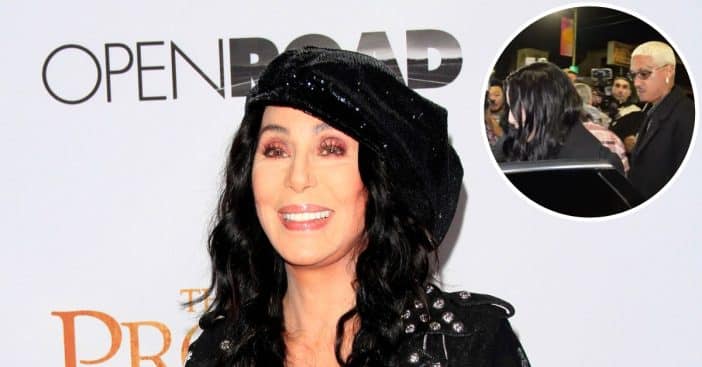 The 76-year-old screen diva and music icon, Cher, was seen returning from dinner with a man half her age in Los Angeles. The 36-year-old, Alexander Edwards, who is a music executive, was holding hands with Cher as they left Craig’s for another location – the Nice Guy, a nightclub not too far away. Joining the pair was 32-year-old rapper Tyga.

Edwards is also known for his past relationship with model Amber Rose and has admitted to cheating on her with a dozen women, per People magazine. A.E., as Edwards is also called, shares a son, Slash Electric, with Rose.

Cher and A.E twinned in black layers from head to toe, with Cher rocking her iconic rich black hair let down and A.E. in his usual platinum haircut. While on their way to Nice Guy nightclub, a mile away from Craig’s, the rumored couple seemed to have a mushy moment. Paparazzi caught a shot of A.E. kissing Cher’s hand on the ride to the club.

RELATED: Cher: The Goddess Of Pop!

It is also reported that the alleged lovebirds headed to Cher’s Malibu mansion later that night. Cher may have been on A.E.’s radar before now, seeing that she posed for a photo with Tyga, his close friend, at the Rick Owens show in September during fashion week.

In his memoir, Cher’s former lover, Val Kilmer, wrote that he and Cher met in 1981, and according to her, it was at a birthday party hosted by Meryl Streep. In a personal essay written by Cher, the Burlesque actress revealed that she did love and still loves Kilmer.

“He’s like nobody I’ve ever known,” she wrote. “He is exasperating and hysterical. Thrilling and funny, and doesn’t do what anyone else does. I don’t know how we stayed friends; we just did. We didn’t try. We just were.”

Recalling their interactions, Cher added, writing her reaction to Kilmer’s documentary, Val, which debuted at the Cannes Film Festival and is available on Amazon Prime:  “I just wrote to him, I said, ‘Valus Maximus, I’m sorry if I did anything to piss you off or hurt your feelings. I love you, and your documentary was all things. I love the things that pissed me off, the things that made me hysterical, amazed, hurt, astonished, etc. You are brave and beyond brilliant. Ethel.'”

Cher’s previous lovers include; Tom Cruise, Gene Simmons, Mark Hudson, ex-husband Sonny Bono, and more, including writer Ron Zimmerman, who she was with in between her break up and make-up with ex Tim Medvetz.

Click for next Article
Previous article: Stevie Nicks And Billy Joel Team Up For Concerts In 2023
Next Post: ‘Wide Country’ And ‘Chisum’ Star Andrew Prine Dies At Age 86