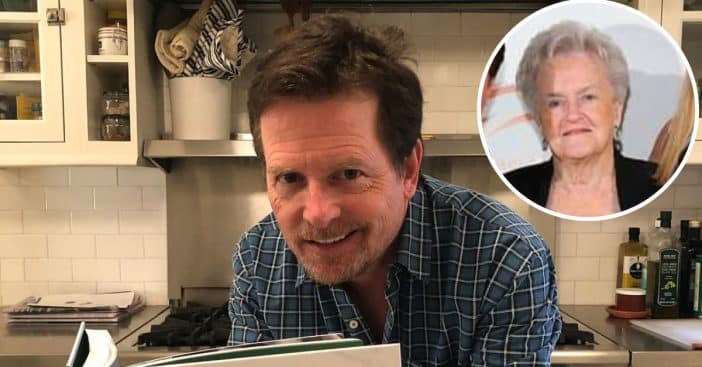 Grammy award winner Michael J. Fox recently had a reunion with his former co-star Christopher Lloyd. The duo reminisced about their blockbuster sci-fi comedy, Back to the Future, which hit the screen in 1985 and has since then had two sequels. Sadly the Rescue Me star couldn’t help talking about his mother’s death.

The star celebrated his late mother, Phyllis, who died some weeks back at 92, and also paid tribute to her during the Back To The Future reunion panel at New York Comic-Con (NYCC). The Back Home Again star also addressed his struggles with Parkinson’s disease and how hopeful he lives each day.

His mom never supported his role Back to the Future

The Hard Way star revealed how his mother didn’t support him when he decided to feature in Family Ties during the day and also cast in Back to the Future at night. “I was 23 years old, and I called her, she was in Canada, and I said, ‘They want me to do this Steven Spielberg movie, but I have to do it at night and I have to do Family Ties in the daytime.’ And she said, ‘You’ll be too tired.'”

RELATED: Michael J. Fox Would Be Open To Acting Again Under One Condition

“I live for this kind of tired. It’ll be okay,” he replied to his mom, “To this day — well, till two weeks ago — my mother thought it was a really bad idea for me to do Back to the Future. She loved the movie, [but she was right], I got tired.”

According to an online obituary, Michael’s mother was born in Winnipeg, Manitoba, in 1929 to father Henry “Skip” Piper and mother Jane “Jenny” Piper.  Phyllis had three brothers, Kenneth, Stuart, and Albert, and a sister, Patricia. Her life was traumatic as she witnessed the loss of all her siblings, her husband, and two children.

The 92-year-old is survived by two sons (Steve and Michael) and two daughters (Jackie and Kelli). Other survivors include nine grandchildren, 10 great-grandchildren, and a great-great-granddaughter. Phyllis was described as someone whose joy grew no bounds relating to and seeing her family around. “Nothing made her happier than watching her family grow.”

Her online obituary also details a clarion call to the public to make donations instead of flowers in Phyllis’ name to the Burnaby General Hospital, the BC Children’s Hospital, and Canuck Place to promote the treatment of various medical conditions, which includes diabetes and Parkinson’s.

Michael is optimistic amidst life’s struggles

During the NYCC panel, Michael also detailed his struggle with Parkinson’s and how he is living with it despite all odds. “Well, in the last year I’ve broken my cheek, my eye socket, my hand, my elbow … my shoulder. I had a rough year of getting beat up,” he revealed. “But that was really cool because it made me realize … with gratitude, it’s sustainable.”

He continued, “If you can find something to be grateful for, if you can find something and say, ‘Well, that’s good,’ … It’ll always get better… I’m very optimistic.” The Hard Way star concluded, “I’d say optimism is thinking that things are more likely to get better than they are to get worse. If you believe in that, and you are grateful for it, that’ll sustain you the rest of your life.”