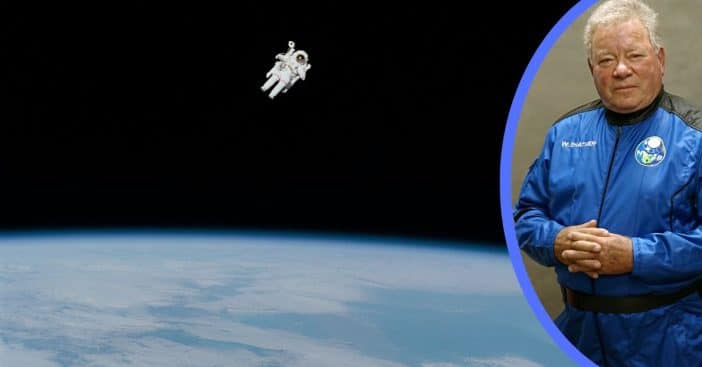 Space is the final frontier very familiar to USS Enterprise Captain James T. Kirk – and now it is familiar to his actor, William Shatner. Roughly a year ago, Shatner went into space, the oldest individual to do so, and came back shaken by the experience. For his biography, Boldly Go, he puts into definitive words what it was like to be up there, and it is at once awe-inspiring and intimidating.

Boldly Go released on October 4 through Simon & Schuster and was written as a collaboration between the Star Trek actor and TV and film writer Joshua Brandon. When Shatner completed his ten-minute trip into space aboard a Blue Origin spacecraft, Shatner said what he could in the aftermath of the shocking experience. Through Boldly Go, he more thoroughly outlines what he saw, which, he made clear, was death.

“I saw a cold, dark, black emptiness,” Shatner outlined. “It was unlike any blackness you can see or feel on Earth. It was deep, enveloping, all-encompassing. I turned back toward the light of home.” Looking toward space, “All I saw was death.” This elaboration is consistent with the quick rundown Shatner gave when he first touched back down to Earth, when Shatner said he was “seeing death.”

All this was in sharp contrast to what he saw looking back home. He continued, “I could see the curvature of Earth, the beige of the desert, the white of the clouds and the blue of the sky. It was life. Nurturing, sustaining, life. Mother Earth. Gaia. And I was leaving her.”

William Shatner says his trip to space on Blue Origin 'felt like a funeral': 'It was among the strongest feelings of grief I have ever encountered' pic.twitter.com/ub4CETZYJq

Shatner was 90 years old when he went into space, which makes him the oldest person to perform such a feat. But the surprises don’t end there. Sure, it’s understood Star Trek won’t be a complete reenactment of space exploration, but the Blue Origin team included a space industry engineer and an orbital satellite inventor and mission architect; plenty of informed parties can give a rundown on what to expect.

None of it was enough to prepare Shatner, who admitted, “Everything I had thought was wrong. Everything I had expected to see was wrong.” What he couldn’t have anticipated was the grief he’d feel, the strongest he’s ever felt, according to Boldly Go, thinking about humans destroying the wonderful orb he beheld. He even likened it to a funeral. “When I got up to space, I wanted to get to the window to see what it was that was out there. I looked at the blackness of space,” Shatner recalled. “There were no dazzling lights. It was just palpable blackness. I believed I saw death.”

Back on Earth, he is now more alarmed that death should come for the planet he and others call home. This voyage of the spacecraft Blue Origin was one of heartbreaking beauty and fear.