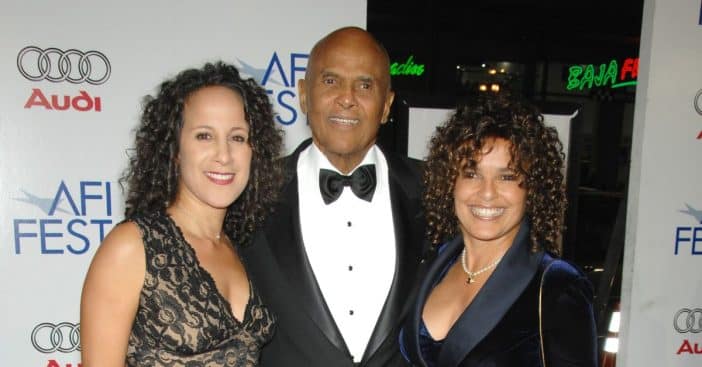 Legendary singer Harry Belafonte, 94,  is a father to four children — Adrienne, Shari, his only son David, and Gina. Like their dad, they are doing great in the entertainment industry, except for Adrienne, who chose the activism side of Belafonte.

The “King of Calypso” had his four kids from two previous marriages to Marguerite Byrd and Julie Robinson. He is currently in his third marriage to Pamela Frank, who works as a photographer.

Harry’s eldest child and daughter, with his first wife Marguerite, is doing great in the humanitarian and counseling line. Adrienne works at the Amir Foundation, which offers volunteering opportunities in South and East Africa, as an executive director, along with her daughter, Rachel. She received her Bachelor in Arts from West Virginia State College and got her Master’s in Art in Community counseling.

RELATED: Celebrities 90 And Older Prove Age Is Just A Number

She has practiced counseling for families and children for over two decades. In 2019, she delivered the keynote speech at an event held to honor the life of the Late Martin Luther King Jr., which was held in her Alma Mata, West Virginia State College. Her father was a friend of Martin Luther King Jr.; therefore, it was an honor close to home.

Shari is Harry’s second daughter, and she excels in the spotlight like her dad, but as an actor. Born in 1954, Shari made her debut in the 1982 film, If You Could See What I Hear and went on to act in shows like General Hospital, The Morning Show, Sistas, and ABC’s Hotel, where she played Julie Gillette.

The actress is in her second marriage with actor Sam Behrens who she married in 1989 after her divorce from first husband Robert Harper in 1988. Shari’s most recent appearance on television was on FOX’s 9-1-1 as a guest.

Harry’s first and only son, David, is an actor like his half-sister, Shari. He has appeared in productions like Timebomb and Across the Tracks. David has mostly worked with his father on the 1997 TV special, An Evening with Harry Belafonte & Friends, and served as Vice President of Belafonte Enterprises, an entertainment publishing company founded by Harry.

David had his daughter, Sarafina, in 2003 with his model wife, Malena Belafonte, who he married in 2000. The couple is happily married and remains together still.

The youngest, Gina, was born in 1964 and has been acting since the ’80s. She starred in The Commish as Carmela Pagan and returned to acting in 2016 after a long time away from the cameras. Her most recent roles include Courting Des Moines (2016), the biopic BlacKkKlansman (2018) directed by Spike Lee, and the shorts “Summer of Soul ( … Or When the Revolution Could Not Be Televised)” (2021), “Taming Kara” (2022) and the forthcoming “5 Tips and Tricks in a Relationship.”

Like Adrienne, Gina also has a passion for humanitarian causes. She works as an activist with Sankofa.org, a social justice organization founded by her father. The organization’s goal is to educate, motivate, and activate artists and allies in service of grassroots movements and equitable change. Gina is happily married to Scott McRay, and they share a daughter.