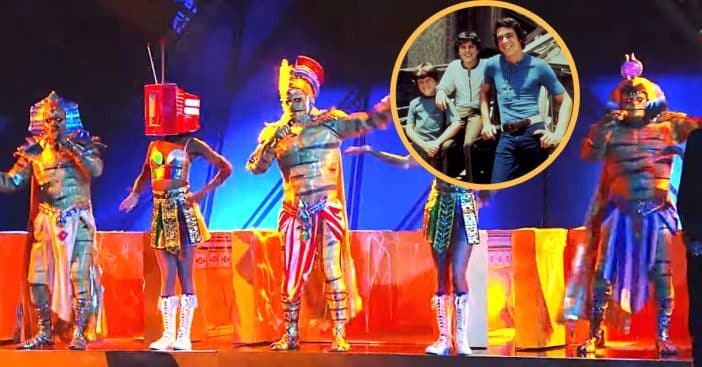 As a franchise, The Masked Singer has traveled great distances to land on American televisions, crossing oceans and continents with steady acclaim. But this week, it also traveled back in time for a special sitcom-themed evening where Masked Singer participants had to belt out TV show theme songs, and of course such an event wouldn’t be complete with out a nod to The Brady Bunch.

But the sitcom nostalgia wasn’t limited to the music. In fact, the participants themselves – singers, panelists, and guest stars alike – hail from big TV programs. When it came time to eliminate a group from the contest, The Mummies were chosen to go – but first they had to be unmasked and it made for some very nostalgic viewing. Though, some important co-stars were missing from this very Brady band. Why?

Meet the very Brady Mummies of ‘The Masked Singer’

The Masked Singer format dictates some mystery contestants anonymously serenade the judges and audience members, but if they should be chosen for elimination, the elaborate mask must come off – after a lot of guessing from the panel. Shows such as these sometimes have themes to abide by and this week introduced a TV theme. Contestants who had just been known as the Harp, the Fortune Teller, and the Mummies sang songs from The Golden Girls, The Jeffersons, and The Monkees.

The Mummies were selected for elimination, which meant it was time to unwrap the bandages of these musical monsters. Jenny McCarthy-Wahlberg was sure she was listening to the Taylor brothers from Home Improvement, specifically Jonathan Taylor Thomas, Taran Noah Smith, and Zachary Ty Bryan. Ken Jeong guessed the brothers Matthew, Martin, and Joey Lawrence from the 1995 sitcom Brotherly Love. But Robin Thicke, son of the late Alan Thicke, and Nicole Scherzinger correctly guessed that the Mummies were actually the Bradys.

The Mummies were Barry Williams, Mike Lookinland, and Christopher Knight. However, the actors who played their sisters throughout the ’70s sitcom were not present. “It was always, when it got serious, it was only discussed as the Brady boys,” Williams explained. “But it would have been fun to have [one of the] girls in there, as long as they kept extending the numbers, like four, to five, to six — we wouldn’t want to sacrifice anyone.”

Discretion also had something to do with it. Part of the appeal of The Masked Singer is anonymity and getting to guess who might be the singer. Referring to co-star Susan Olsen, Knight teased, “Of course, if we had told Cindy the whole world would know by now. That might be why they didn’t ask the girls.” The Brady Mummies stopped participating but in the final face-off, the Fortune Teller and Harp sang “Everywhere You Look” from Full House. Facing defeat from the Harp, the Fortune Teller proved to be more of a fortune maker as Shark Tank investor Daymond John.

Round two will feature new contestants while the Harp waits for the semifinals.

Click for next Article
Previous article: Wynonna Judd Shuts Down Rumors Of A Feud With Her Sister Ashley
Next Post: 64-Year-Old Andie MacDowell Proves Gray Is Beautiful For Paris Fashion Week