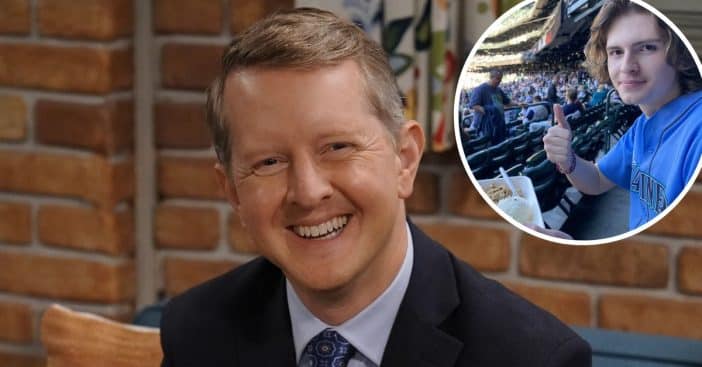 Ken Jennings made history when he won 74 games in a row on Jeopardy! back in 2004. He returned for several champion tournaments and became a fan favorite. Now, he’s been named the permanent co-host along with Mayim Bialik after longtime host Alex Trebek passed away in 2020.

The 48-year-old has never shared much about his home life. However, now he seems to be opening up more and sharing some rare glimpses into his life with his family. His wife’s name is Mindy and they have two teenagers, Caitlin and Dylan.

The last time his team made it to the playoffs, this guy wasn't born yet. He just started his sophomore year of college. Congrats @Mariners! pic.twitter.com/pFgC2BbMqI

Over the weekend, Ken shared a photo of his son, Dylan, at a baseball game. In the photo, Dylan is wearing a Seattle Mariners baseball jersey and holding a tray of food, while giving the camera a thumbs up.

Ken captioned the photo, “The last time his team made it to the playoffs, this guy wasn’t born yet. He just started his sophomore year of college. Congrats @Mariners!” Fans quickly noticed the striking resemblance between Ken and his son.

Ken left his academic career behind and will now host Jeopardy! full time, including Jeopardy! Second Chance and the Tournament of Champions. Do you prefer Ken or Mayim as the host of the popular game show?

Click for next Article
Previous article: Elvis Presley’s Family Confirms He Hid A Lot About His Appearance With Dye, Facelifts, And More
Next Post: Vanna White On Why She Doesn’t Consider Herself A ‘Sex Symbol’