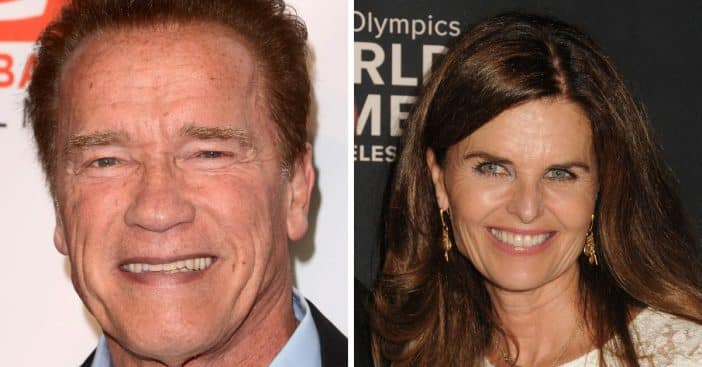 Before Hollywood and political power couple Arnold Schwarzenegger and Maria Shriver broke up, during an episode of The Tonight Show host Jay Leno asked Arnold if he ever lied to his ex-wife. The Terminator star revealed that he had never lied to her — although Leno rephrased the question and brought up a strip tease scene he was in with Jamie Lee Curtis.

“Let me put it another way; I’ve seen the movie True Lies, very funny,” Leno began. “There’s a scene where Jamie Lee Curtis does this strip tease, and you’re sitting in a chair in the house, and you have to watch her. I assume you have to do this over and over again to get it right. You go home and asked how was filming today, and you just go, ‘Oh just another day.'” Still trying to establish that he had never lied to Maria, Arnold replied, “That’s exactly what I do. I go home and then say, ‘It was a hard day at work and they do many stunts, and it’s a really difficult job.'”

Then, he mentioned a particular instance he did lie to her, “I remember Conan The Barbarian, I was doing the filming, there was one scene in there where I had to wrestle around naked with another woman that was naked, and it became all those kind of things,” Arnold recalled.

“And Maria said to me, ‘Did you have to do this kind of scene?’ and I said, ‘No stunt people do that; we don’t do these kinds of scenes; we have stand-ins and stunt people who do that. Then she saw the film, I mean she was very angry, of course. She saw me there, and I remember her turning to me in the middle of the screening and just looked to me and says, ‘did you enjoy this?’ and I said to her, ‘I hated every hour of it,'” he continued trying to imitate how Maria rolled her eyes. Leno and the audience laughed at the hilarious incident. However, Arnold claimed she was angry because he had never wrestled with her like that.

Definitely not the last lie he told

The couple separated in May 2011 and officially divorced in December 2021 after Arnold confessed to having fathered a child with a household staff that worked with them for 14 years. Despite the separation, they continued to co-parent, which the 74-year-old appreciates his ex-wife for.  “We work together even though we’re going through a divorce. … We make sure that the kids grow up to be really good human beings,” he said.