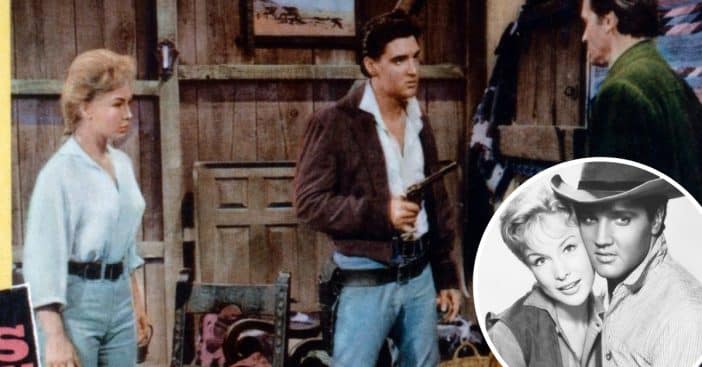 I Dream of Jeannie star Barbara Eden appeared alongside Elvis Presley in the 1960 film Flaming Star. With all of the talk of the new Elvis biopic, Barbara has been asked again about her time working with Elvis and if she has any fond memories of him. Of course, the other thing everyone wants to know: were they involved romantically at all?

The 90-year-old said that they were just friends. She was married to Michael Ansara at the time and had no romantic interest in Elvis like many of the leading ladies in his other films. Barbara said, “Elvis was a delight. He didn’t get the girl and he died — and he was fabulous! He was so wonderful. I think it was the only film he did that he got really good reviews for his acting and he didn’t sing a song. … His fans hated it, but the critics loved it, and he was a joy to work with.”

She added, “I’d come on the set and he’d get me a chair. Actors don’t do that. You can sit on the floor, they don’t care. And in between shots, when they were fixing the lights and everything, he’d get his guitar out and he’d sing. Wonderfully, he’d sing. … And we used to talk. We talked a lot.” Barbara said that they talked a lot about her marriage and Elvis talked about meeting Priscilla.

Barbara also said that she and Michael attended Elvis’ show in Las Vegas a few years later and said that he was wonderful. She likes to remember him in his younger days and not the later years before his unexpected passing.

Click for next Article
Previous article: Meghan McCain Says A Joy Behar Remark Made Her Cry And Quit ‘The View’
Next Post: Donna Mills Wants To Relaunch Her Career At 81 Years Old