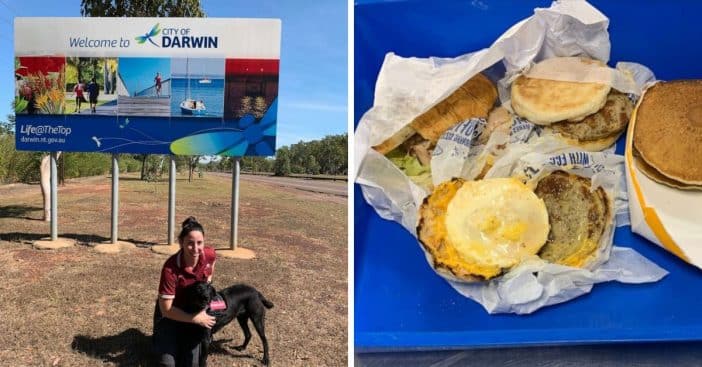 At the international borders, Australia has very strict biosecurity measures in place to stop the introduction of dangerous pests and diseases. Any food items brought into Australia must be declared on your Incoming Passenger Card if you come by plane or on the parcels you mail. Biosecurity officers may need to inspect some of the food you’re bringing with you. Even small amounts of some foods or cooking ingredients brought into Australia need to be declared.

An inbound passenger was caught at an Australian Airport for failing to declare his breakfast. The food, two McDonald’s McMuffins were detected as a breach of biosecurity by a dog who caught the passenger who was traveling from Indonesia to Australia through Darwin Airport. Zinta, the newly acquired airport security detector dog, found two egg and beef sausage McMuffins and a ham croissant tucked away in the passenger’s bag.

The Passenger Was Slapped With A Lawsuit In Australia

As the punishment for his offense, the man has been indicted with a 12-unit infringement which totals $2,664, for failing to declare potentially high biosecurity risk items and issuing a false and misleading travel declaration form.

Murray Watt, Australia’s minister of Agriculture, Fisheries, and Forestry, spoke on the incident. “This will be the most expensive Maccas meal this passenger ever has, this fine is twice the cost of an airfare to Bali, but I have no sympathy for people who choose to disobey Australia’s strict biosecurity measures, and recent detections show you will be caught.”

“Biosecurity is no joke—it helps protect jobs, our farms, food, and supports the economy. Passengers who choose to travel need to make sure they are fulfilling the conditions to enter Australia by following all biosecurity measures,” he continued.

The minister confirmed that the Dog, Zinta, that works at the Darwin Airport, was sent by the Albanese government as part of its efforts to fight against biosecurity threats. Foot and Mouth Disease is not found in Australia, and the government wants to keep it that way, so there is a need for the likes of Zinta.

People traveling to the island nation with strict food safety regulations may want to consider biosecurity measures. A 19-year-old Australian, Jessica Lee, was also slapped with $2,664 Australian dollars because she failed to declare a Chicken Footlong topped with lettuce that she bought in Singapore immediately after she landed in Australia.

She made a video on TikTok, which later went viral, stating that the reason why she did not declare her food was because of jetlag, which caused her to forget the food item entirely.“I just paid $2,600 for my subway just from Singapore,” she explained in her video post at the time. “I bought a footlong Subway at Singapore Airport because I was a hungry girl after my 11-hour flight. I ate six inches before my second flight and then saved the other six inches for the flight, which (airline agents) were more than happy with.”

Click for next Article
Previous article: Melanie Lynskey Says She Was Body Shamed While Filming ‘Coyote Ugly’
Next Post: The Last Of The Woolworths Soda Fountain Machines