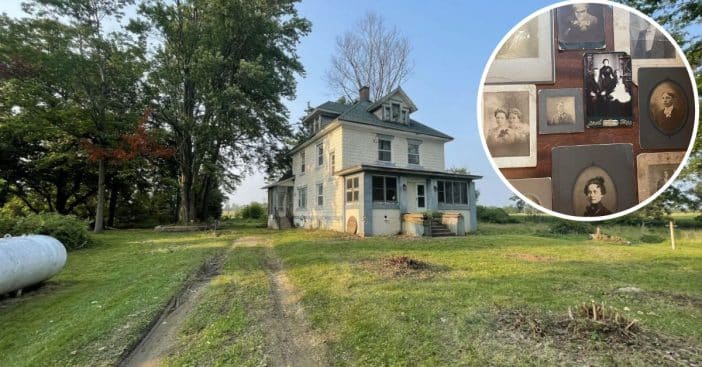 A young couple decided to relocate from the city to a big old farmhouse — a move that is not unusual, but would lead to an unusual discovery. The discovery was made is an American Foursquare house built in 1914. Foursquare houses were popular from the mid-1890s to the late 1930s in America. The wife decided to share their startling discovery in the home in a creepy manner on her Reddit account, and over 500 upvotes and 75 comments would trail her post in just a short while.

She stated, “Young couple moves from the city to a big old farmhouse on land for dirt cheap. They start renovating… Husband is away for work for months at a time. [The] wife is left home alone with the animals and to manage the farm. Will she be possessed when he gets home???… Oh yeah, and when we bought the house there were dozens of dolls on the third floor looking out the window when you pulled up. 😬” From there she added to her creepy tale a comment about the previous owners before revealing the discovery she made.

She remarked that after purchasing the home, the previous owners were given the opportunity to go through the house to see if they had left behind any belongings that they still wanted. What they chose actually surprised her: “We bought the home in probate and I was able to make contact with the family to see if there was anything they wanted (the house came with everything in it and they were hoarders). All they wanted was one small tote of family photos.”

RELATED: After Losing Their House, Couple Moves Into Home Depot Shed And Makes A Profit

Though their prized possessions were the family photos, the former owners actually left behind over 3,000 square feet of stuff, including a mystery-box in the attic.

This box was loaded to the brim with treasures from the Victorian era: photos of people that are already dead, but taken in a manner that lends an air of life, making it difficult for people to ascertain who is dead and who is still alive. This creepy practice is popularly known as “Mourning Tableaux,” the mystery for others being just who the people in the photos are.

Wife Shares A Plan For The Discovery

Fellow Reddit users had a few things to say about this weird and fascinating discovery, comments including, “This is such an incredible find” and “As someone who collects antique photographs, I’m a little jealous lol; such wonderful little pieces of history.” Two users wrote. “When I see these old photos for sale, it always makes me sad. So glad you are going to celebrate these people” and “What a great treasure to find in your home. 🙂 Thank you for sharing!” other users commented.

The wife, who goes by the username u/_planties on Reddit, informed her audience she plans to honor the memories of the people in the photos by hanging them in their home; she wrote: “We have two staircases in the house, maybe I’ll do a gallery wall going up one of them! … I saved probably 30 or so frames that I found in the house when we were cleaning it out. Maybe that’s what I was saving them for and didn’t know it!” The mystery behind the photos persists, but the memory of the deceased captured in them lives on thanks to _planties.

Click for next Article
Previous article: Susan Sarandon Talks About Becoming A Mother In Her 40s
Next Post: The Story Behind The ‘Joint’ Wrangler Ad Campaign With Willie Nelson, Dale Earnhardt, Richard Childress