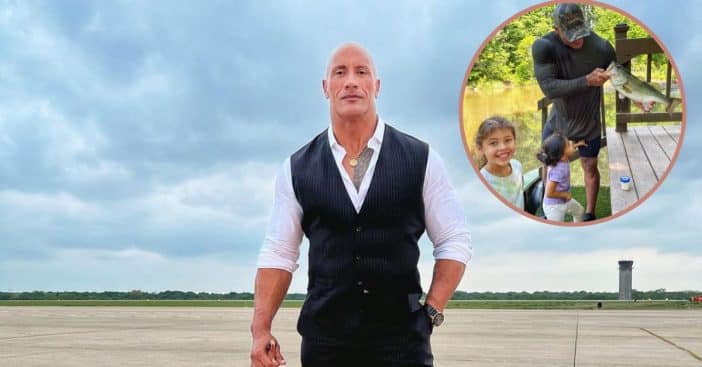 Dwayne Johnson has always been a subject of admiration as an actor, wrestler, and businessman, but amongst them all, being a father to his three daughters is of the greatest importance. The former wrestler, who made his debut movie appearance in the 2001 film The Mummy Returns, is proud father to Simone, Jasmine, and Tiana.

His Experience As A Father

Being a parent can be quite burdensome, but Dwayne is ready to give all it takes to ensure his daughters are happy. This has been the case since 2001, when Simone was born to him and ex-wife, Dany Garcia, who he divorced in 2008. With second wife Lauren Hashian he has fathered Jasmine, born December 17, 2015; and Tiana, born on April 17, 2018.

As a father to three lovely daughters, the Rock feels fortunate to be amidst many strong women. Speaking with ExtraTV in July 2019, Dwayne said, “[Jasmine’s] so beautiful, and her and Tia — and of course my oldest, Simone — it’s just the best thing … I have a house full of just strong, bad-ass women … it’s terrifying, but it’s awesome. I grew up an only child [and] my dad was tough. He kicked my ass … there was a lot of testosterone growing up. So there is this balance, having all this estrogenic energy, then also me having the opportunity to infuse ‘father’ and hopefully setting a standard of what a man should be in their lives.”

Speaking to Fatherly in 2017 on how much he has grown as a parent, he said, “Through life and experience, I’m a different kind of dad. [My daughters] teach me so much, and continue to check me. They’re the equalizer.”

Simone, who is in her early twenties, has a lot going for her already: she is an IMG model and became the first-ever Golden Globe Ambassador for the 2018 events, as well as the youngest person to sign a deal with WWE. The WWE announced in February 2020 that she had begun training at their performance center, where she was set to make her debut, but was stopped by a knee injury in September 2020.

She shared the information in a tweet that said, “So tomorrow, I’m having knee surgery for the third time. As not fun as surgery is, I’m looking forward to my knees not popping out anymore.” When she is not wrestling, the young lady, who graduated from Norfolk State University, has fun spending time with her friends, traveling and chronicling her activities on social media.

Jasmine has yet to go into either acting or wrestling, but made an appearance on the red carpet in 2017 during her father’s induction on the Hollywood Walk of Fame.

Jasmine is also known to feature regularly on her father’s Instagram posts. Dwayne posted a video of the family while celebrating her birthday in 2020 with the caption, “This lil’ tornado has no idea how much her and her baby sister anchors our souls.”

Tiana Gia is the second child of the Hobbs & Shaw star and his wife, Lauren. When she was born, the Rock took to his social media to praise his beloved wife on the birth of their third child. He wrote, “Blessed and proud to bring another strong girl into this world. Tiana Gia Johnson came into this world like a force of nature, and mama labored and delivered like a true rockstar. I was raised and surrounded by strong, loving women all my life, but after participating in baby Tia’s delivery, it’s hard to express the new level of love, respect, and admiration I have for Lauren and all mamas and women out there.”

Like all of her sisters, she is a regular face on her father’s social media pages. During her birthday celebration in 2021, the Rock posted a picture of himself and Tiana and wrote the words, “Happy Birthday to my sweetest lil’ Tia Giana. Loving, kind, tenacious and tough (like your mama), and my greatest joy is being your daddy. I always ‘got you.’”