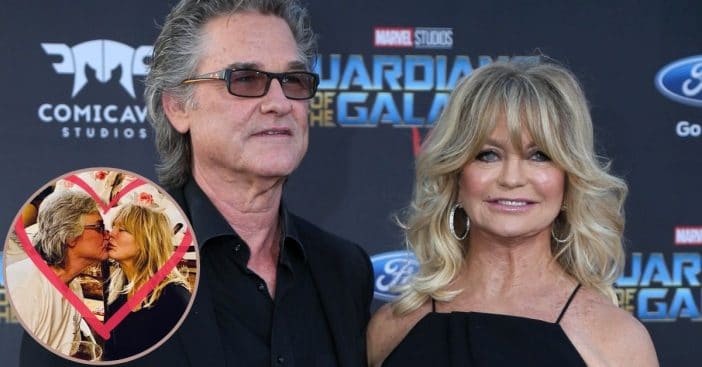 Goldie Hawn and her longtime partner Kurt Russell shared a kiss in their recent Valentine’s Day photo. In the caption, Hawn wrote, “🎶 Love is a Many- Splendored thing 🎶 Happy Anniversary Loverboy ❤️‍🔥.”

The couple spoke to People Magazine about their relationship back in 2020, emphasizing their secret to lasting love. “You’ve just got to want to be together,” she said at the time. “I don’t think there’s any way other than do it.”

Russell chimed in with his thoughts, too, saying, “For people like us, the marriage certificate wasn’t going to create anything that otherwise we wouldn’t have. I don’t know. 40 years isn’t enough to finally say, ‘Well I guess…’ ”

RELATED: Goldie Hawn Admits She Tries To Keep Politics To Herself

She continues, “It’s okay. It’s not about the marriage. It’s about the people and the relationship, and the will to stay together. And that’s a big one because if you want it, you can have it. You’ve got to give things up, but the joy and the excitement of being together and touching the toes of somebody at night is really a nice feeling.”

Funny enough, it was actually Hawn that convinced her son, Oliver Hudson, to propose to his now-wife as he originally didn’t want to get married. “I thought that the perfect relationship was Kurt and Mom,” he said at the time. “I mean, I was a child of divorce, that didn’t work, and then I saw this working.”

It just goes to show ya, sometimes things are perfect the way they are.

Click for next Article
Previous article: Kelly Ripa And Mark Consuelos On Why They Don’t Celebrate Valentine’s Day
Next Post: Susan Lucci Opens Up About Battle With Heart Disease & Undergoing Second Procedure