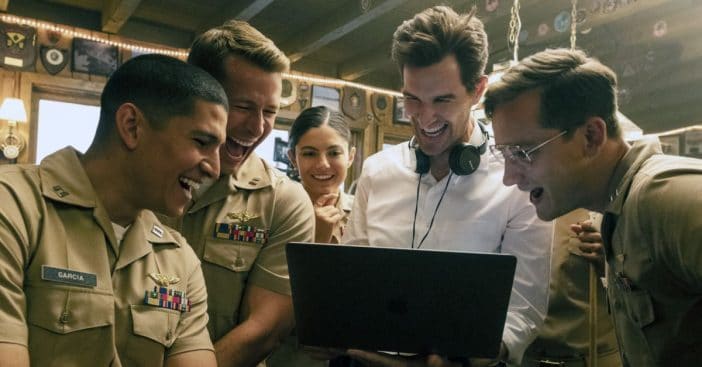 The movie Top Gun: Maverick, the sequel to Top Gun, draws from the inspiration of the latter. The sequel, just like the earlier one, featured a scene that had the cast running and playing sports without their shirts on. The movie director, John Kosinski, had said at one point that his plan for the scene led to an emotional breakdown among the cast.

While shooting the scene, the cast competed playfully to see whose image appeared better. In fact, actor Van Kilmer pointed out that co-star Tom Cruise sabotaged his own volleyball scene because he had a better body than Cruise. “I always suspected Tom Cruise might have cooked my volleyball close-ups. If you notice, I don’t have any…. They got cooked. That means they were over- or underdeveloped. And there weren’t any, and they couldn’t go back. I think Tom went in there, a little payola… because I looked good,” he said to USA Today.

John Kosinski became the director for Maverick, and he thought that the sequel also needed a shirtless scene so as to conform with the earlier version, and he was also a fan of the original Top Gun. “When people found out I was working on Top Gun, that was usually their first question, ‘Is there going to be a shirtless, oily, volleyball scene?’ And the answer that everyone wanted me to say was: yes. So I knew it was kind of a requirement and how disappointed people would be if it wasn’t in there.”

“So then the thing was like: How do we work it into our story? He told Esquire. “So writer Ehren Kruger coined the term ‘dog fight football,’ offense and defense at the same time which seemed like a great concept,” he continued. In order to make the scene perfect, the cast put in the work of building their body to suit the scene. However, when the director told them his plan for the scene, they broke down emotionally.

A cast member, John Hamm, Was Happy He Didn’t Partake In The Scene

“Originally, I conceived the scene as shirts versus skins. And I got there and I started dividing them up, you know, shirt, skin, shirt, skins. And everyone who I told was a shirt started having an emotional breakdown. One of the actors came up to me and said ‘I’ve been working out for six months! Please, please don’t make me put on the t-shirt. So I told them, ‘You know what? Everyone’s on the skins!’ It doesn’t matter.”

Actor John Hamm didn’t partake in the scene because after seeing the rigors the cast had to undergo, he was quite happy he didn’t choose to participate. In an interview with Esquire, he said, “I was very, very happy to leave the shirtless parts to the younger generation.”

Click for next Article
Previous article: Viral TikTok Salad Inspired By Jennifer Aniston Is Not On The Actress’s Menu
Next Post: Kurt Russell Moved To Tears From Kate Hudson’s Loving Father’s Day Message