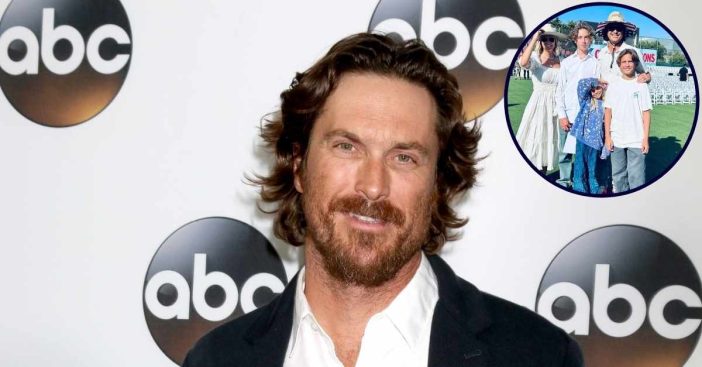 Wilder Brooks, son of Oliver Hudson, is about to take some major steps, and it is unbelievable for his parents. Oliver told his fans that his son has just finished middle school and is set to proceed to high school. He posted a portrait of the family at Wilder’s graduation from middle school.

He shared a picture which has Erinn Bartlett, his wife, dressed in a flowing white gown and black sunglasses with the 14-year-old Wilder, who donned a white buttoned shirt and shaggy blonde hair. Despite the seeming appropriateness of Wilder’s looks, Erinn made a joke about parents not being allowed by their kids to interfere with their looks nowadays. She said, “Anyone else miss the days when you could dress and cut your teenagers hair?”

The actor was born on September 7, 1976, in Los Angeles to Academy Award-winning actress Goldie Hawn and musician Bill Hudson. His parents got a divorce in 1980, making him and his sister, Kate Hudson, who is also a famous actress, move in with their mother’s new partner, actor Kurt Russell in Colorado. Oliver began his acting career starring opposite his mother in the 199 comedy movie, The Out-of-Towners.

RELATED: Oliver Hudson Prepares For Some Major Changes In His Life, Fans React

He got his first lead role in the WB comedy series My Guide to Becoming a Rock Star. He also starred alongside Katie Holmes, playing the role of Eddie Doling, Katie’s love interest in the sixteen episodes of Dawson’s Creek, which ran from 2002 to 2003. Hudson got married to Erinn Bartlett on the 9th of June, 2006, in Cabo San Lucas, Mexico. The union has produced three children: two sons, Wilder Brooks, born on August 23, 2007, and Bodhi Hawn, who was born on the 9th of March, 2009, as well as a daughter named Rio Laura, born on the 18 of July, 2013.

Oliver shared a family picture showing their journey so far

Erinn took to her Instagram stories to talk about the incredible changes that occur in life and how it happens so fast. She posted a picture of her kissing Wilder on the cheek at his graduation from Kindergarten and another image with his son and a friend saying jokingly that “Back when they would smile for the camera.”

Oliver shared another picture of the whole family, which had all three children, of which Wilder is the oldest. The picture showcased Oliver and Erinn donning matching looks with the same straw hat and also how their youngest child, Bodhi, looks so much like her mother as they bold had the same gesture to protect themselves from the sun.

Fan’s Reaction To The Family Picture

Fans have taken their time to send heartfelt wishes to the popular parents on the achievements of their first child following the family portrait shared by Oliver, which was captioned, “Can’t believe we’re going to have a freshman in high school!!!” by the mother. The fans penned down their congratulatory messages writing words such as, “Unbelievable,” “Happens so fast!!!” and another reading, “That’s crazy, right? You all look wonderful!!!”

RELATED: Oliver Hudson Jokes He ‘Won’t Leave’ After Moving In With Goldie Hawn And Kurt Russell