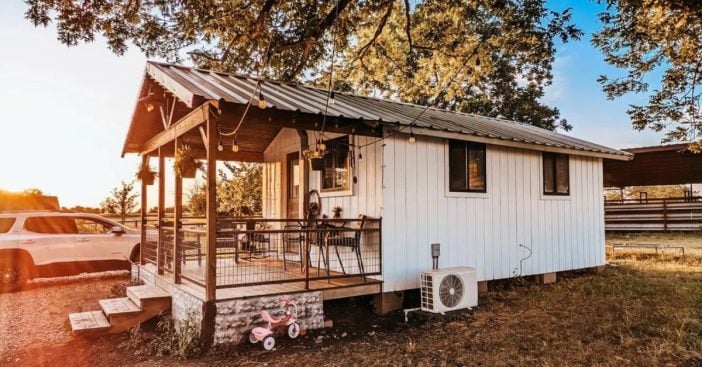 Katy and Michael Krebs have been living in rented apartments for seven years. During the pandemic, they decided to find a place of their own to live with their kids, Carolina and Harper. An old shed from Michael’s grandparents seemed just like the right place to turn into a home. “I’ve been in love with tiny homes forever. I used to watch tiny-home shows on TV all the time. When my husband brought me to look at an old shed his grandparents had, it was like a dream come true,” Katy said.

The couple had inherited the 70 acres of land having the shed on it in Fayetteville, Texas, from Michael’s grandparents. The property also had some agricultural land on it. “We thought the shed was the perfect thing to fix up and make into a tiny home, where we could live while saving up some money so we can have money for the forever house,” Katy added in her interview with Insider.

How Did They Do It?

They plan to live in the now transformed shed until they have saved up enough to move to the main house, which was Michael’s grandparents’ home. Seeing old photos of the run-down shed makes one wonder how the couple transformed it into a pretty house. The 280-square-foot shed, built in the ‘80s, had no plumbing or electrical wiring as it was simply used as storage space.

RELATED: This Couple Created A Tiny Home From An Old School Bus

The couple took on the task themselves, starting with cleaning up the leftovers in the shed and then bringing down the inside walls. “We took the plywood walls and the plywood ceiling off, and it still had insulation that was in great shape,” Krebs said. “We were able to retain the original flooring, too, as they were in excellent condition.”

They also changed the windows and fixed the roof, giving it a new coat of galvanized paint to protect it from rust and corrosion. After that, they repainted the outside walls of the shed after scraping off the old paint. “They were old aluminum windows, so we just popped them out and added new vinyl ones. You can tell the shed was definitely old, and the paint was dry-rotting, so we had to scrape all of that off,” Krebs added.

The Krebs transformed the house with less than $20,000

As they were on a tight budget, the couple had to find innovative ways to reuse old materials to save money. “We put in a beam that we found in an old barn out in the pasture on the property. We also took all the wood off of that and used it as our ceiling. The door was in such great shape when we found it, so I just sanded it down and put a window in it. I didn’t even paint it,” Krebs said. “I thought that would be perfect for the tiny house.”

They had to change the entrance position of the former shed from back to front, and they did this by covering up the old entrance behind and creating a new one in front. Other things like partitioning, framing, and making the porch were done by the couple, who admit that Youtube helped a lot. Speaking on creating the rooms, Krebs said, “We looked on YouTube a lot to figure out how to do this and how to do that. We did all the framing ourselves — it was just us, me and Michael, with our two girls by our side. It’s a good thing my husband knew what he was doing.”

They made their 8-foot porch, and family and friends did join them in renovating their new home. The couple also hired an electrical company to link the house to the primary electricity source, but they handled the wiring themselves.

Cost of the tiny house

The whole process took nine months and a $16,000 spend. “We started in September of 2020, and we finished in May of 2021,” Krebs said. “We knew we wanted to be under $20,000, so thankfully, we managed to complete it before the price of everything got more expensive,” she added.

Speaking on her experience building a house during the pandemic, Krebs told Insider: “Building the home during the pandemic really wasn’t that bad, probably because we reused a lot of the old lumber and other materials that we already had lying around. We have a local home-improvement store too, and thankfully they weren’t really backed up on the supplies either.”

Click for next Article
Previous article: 14-Month-Old Grace Warrior And Bindi Irwin Brave The Rain In New Photo
Next Post: Brooke Shields Is Fighting Back Against Ageism In Hollywood