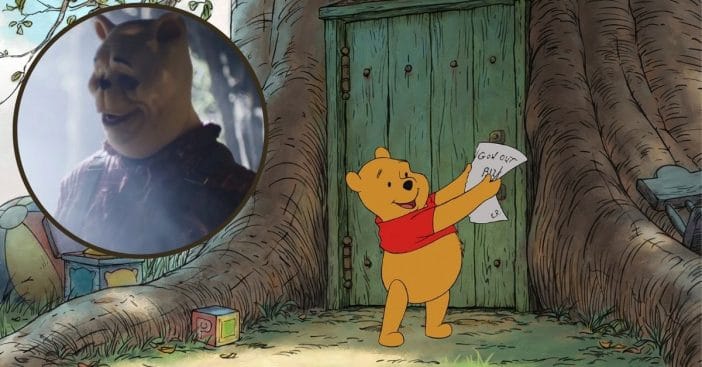 Winnie the Pooh is officially getting the Hollywood horror movie treatment, and will promptly be named Winnie the Pooh: Blood and Honey. According to reports, the film is being produced by Rhys Frake-Waterfield, which released a batch of new images from the independent film. And for those wondering how they can get away with turning a beloved Disney classic into a horror movie, Disney no longer has the exclusive rights to AA Milne’s works, making the film possible.

So now, anyone can make their own Pooh stories—even slasher-esque horror films. The famous bear first appeared in 1926 and its original copyright lasted a whopping 95 years before becoming public domain.

‘Winnie the Pooh’ will see Pooh and Piglet as slasher villains

The indie film’s cast consists of Amber Doig-Thorne, Maria Taylor, and Danielle Scott. Director Rhys Waterfield opens up to Variety about the immediate fan response towards the new images released, and he says it’s all been “absolutely crazy.” He further explains, “Because of all the press and stuff, we’re just going to start expediting the edit and getting it through post production as fast as we can… But also, making sure it’s still good. It’s gonna be a high priority.”

According to Waterfield, the film will see Pooh and Piglet as “the main villains…going on a rampage” after being abandoned by college student Christopher Robin. “Christopher Robin is pulled away from them, and he’s not [given] them food, it’s made Pooh and Piglet’s life quite difficult.” He continues, “Because they’ve had to fend for themselves so much, they’ve essentially become feral… So they’ve gone back to their animal roots. They’re no longer tame: they’re like a vicious bear and pig who want to go around and try and find prey.”

The film was shot in just ten days in England, and Waterfield says fans should not expect a Hollywood-level production, trying to find the perfect balance between horror and comedy, which proved to be a challenge. “When you try and do a film like this, and it’s a really wacky concept, it’s very easy to go down a route where nothing is scary and it’s just really ridiculous and really, like, stupid. And we wanted to go between the two.”

Click for next Article
Previous article: Ray Liotta’s Daughter Set Him Up With His Fiancée Jacy Nittolo
Next Post: Kelly Ripa Plays Matchmaker For Son Joaquin