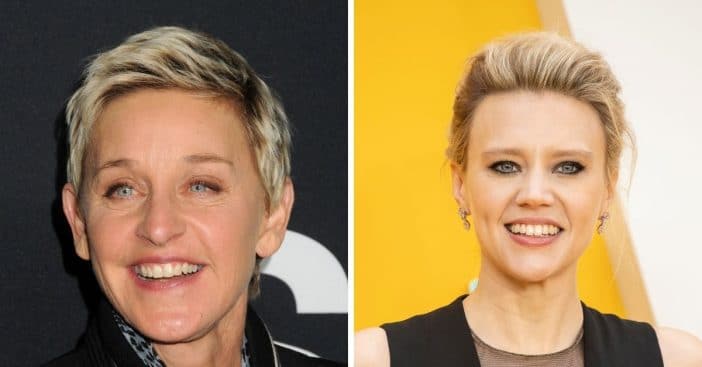 It was a sensational send-off on the Ellen DeGeneres Show as it marks twenty years of broadcast with Kate McKinnon reading an imaginary letter she would have written as a thirteen-year-old to Ellen DeGeneres.

While on the Monday episode of the show, the thirty-two times Day Time Emmy Award winner and three times Grammy Award nominee requested McKinnon to reflect on her best memory from the show.

“My favorite memory from this show is maybe right”, reflects McKinnon as a means to appreciate you, I will like to read a letter which I would have composed for you when I was 13.”

“Dear Mrs. DeGeneres,” the Emmy award winner read the letter in a voice recognizable to her young characters. “My name is Kate. I’m from Long Island. It’s come to my attention that I am gay as hell. No one else is gay for 200,000 miles, so it’s nice to know that you exist. I bet if I ever met you, I would act so weird, So I hope I never do,” she continued and this drew rapturous laughter from the audience.

Earlier in the video, the duo reflects on McKinnon’s first foray into acting as DeGeneres on Saturday Night Live a decade ago after joining the NBC sketch series. “I didn’t know you but I saw you doing me and I was flattered by it,” DeGeneres recounted.

Facing the audience on the show, McKinnon recalled when the former connected with her after her first time acting like her. She commented about her first time on Ellen’s show and how she acted “so weird.”

Apart from impersonating Ellen on SNL and The Ellen Show, McKinnon has often times given due accolades to the ace comedian. During the presentation of the Carol Burnett award at the 2020 Golden Globe Awards, she tagged DeGeneres as the “greatest comedian of all time” and eulogized her for her positive impact on the lives of so many people including hers.

As The Ellen Show has its final episode at the end of the month, lots of guests have been billed for appearances such as the former First Lady of the United States of America, Lady Michelle Obama, Jennifer Garner, Actor Channing Tatum, Wimbledon champion Serena Williams, Zac Edie to mention a few.

Click for next Article
Previous article: Identical Twins Surprise Mom With An Adoption Request On Mother’s Day
Next Post: Ken Jennings Confirms He Is Leaving ‘Jeopardy!’ For Several Months