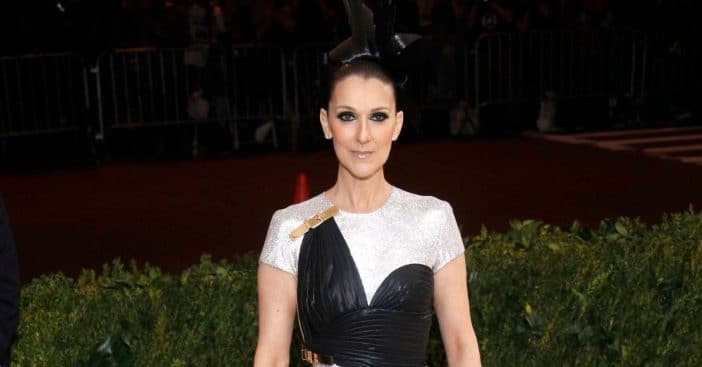 Céline Dion posted a throwback of a clip from a behind-the-scenes look at her music video for “I’m Alive.” The video was filmed 20 years ago, and it recently gathered a total of 300 million views on YouTube.

She captioned the clip penning a heartfelt thank you message to her fans. “#Throwback to 20 years ago this month when Céline filmed the “I’m Alive” music video, fun times! Recently, the video hit the legendary mark of 300 MILLION views on @youtube! Thanks to all of you for watching… probably more than once! – Team Celine.”

The award-winning singer rocked a couple of iconic looks in the video. One of the looks was her in a bronze satin gown, which she looked dazzling in, as the materials attached to her fingers and created elegant wings.

There was another of her in a dazzling strapless gown that was sparkling all over. She wore some silver strappy shoes and hoop earrings in the same shade. There was another one of her in a pink vest and blue flared jeans. The look was simple but fabulous. As expected, fans wasted no time telling how much they loved the throwback. Some of the comments include:

Some fans also commented on the song and what it means to them.

“This song is so full of joy! I love performing it!”

“This song has helped me a lot the song is beautiful.”

After announcing that she was suffering from spasms, which caused her to put the tour Courage on hold for a while, the singer has revealed more news to her fans. She announced that the final postponed dates for six of the shows from her Courage tour will now take place in 2023. She made the announcement via an Instagram post filmed from inside her home.

“Hi everyone. Well, here we are again. I’m so sorry that we have to change our tour plans for Europe one more time. First, we had to move the shows because of the pandemic, and now it is my health issues that is causing us to postpone some shows and unfortunately, we have to cancel some too.

She admits feeling frustrated at what’s going on with her health. “The good news is that I’m doing a little bit better but it’s going very slow. It’s very frustrating for me. I’m getting treatment from my doctors, taking medication, but I’m still experiencing some spasms and it’s taking a lot longer for me to recover than I had hoped.”

She assured her fans that she is doing all she can to get back to good health and that she is slowly getting better, as she is currently receiving medical treatment and attention. “But all I can say is that I’m doing my very best to get back to the level that I need to be so that I can give 100 percent at my shows because that is what you deserve.”

RELATED: Inside The Decades-Long Relationship Between Celine Dion And Manager René Angélil