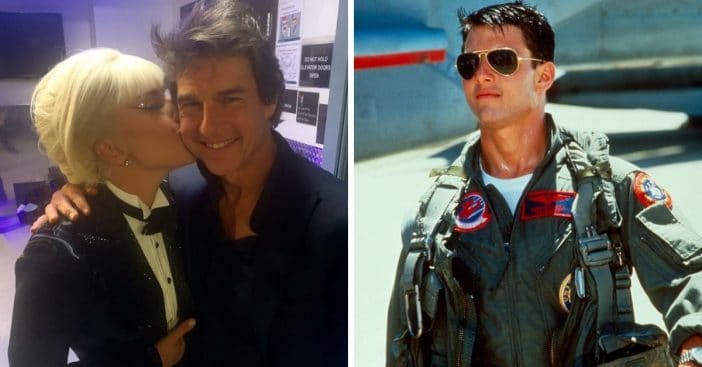 Tom Cruise absolutely loves Lady Gaga’s new song for his newest Top Gun movie called Top Gun: Maverick. The new song called “Hold My Hand” is what Cruise also calls the “heartbeat of the movie.” Cruise recently stopped by The Late Late Show to talk about the film and how much the song has had an impact on the highly-anticipated sequel.

Not only did Gaga write this song that Cruise loves so much, but she also helped compose the score for the entire movie. “It just opened up the whole movie. She’s amazing,” he tells James Corden.

“It just opened those doors to the emotional core of the film that we had … in that moment, things just came together in such a beautiful way. Her song that she’d written just fell right in and became, really, the underlying score and the heartbeat of our film.”

The post continues, “When you feel lonely, sad, removed from the world, far away from yourself and others #holdmyhand One day you may even be strong enough to hold your own 🤝. I love you with my whole heart for all the years I’ve been blessed to sing, write songs, produce and perform for you. Thank you 🙏 here we go!!! 🖤✈️”

Some of the lyrics from the song are as follows:

“So cry tonight / But don’t you let go of my hand / You can cry every last tear,” belts Gaga during its hook. “I won’t leave ’til I understand / Promise me, just hold my hand.”

Listen to the song “Hold My Hand” from Top Gun: Maverick below:

Click for next Article
Previous article: Sharon Osbourne Shares Photo Hooked Up To IV As She Battles COVID-19
Next Post: Jimmy Kimmel Taking Break From Late-Show After Positive COVID Test