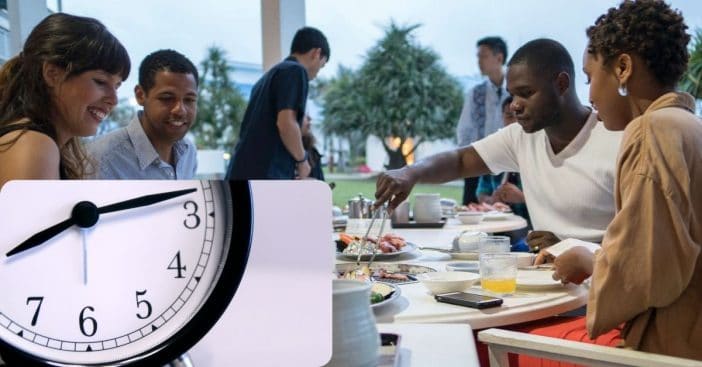 A new study has suggested that eating dinner around 7 p.m. each day may help you live longer. While a number of studies have been thrown around about what time you should eat dinner, this one is fairly interesting, considering a lot of studies say you should eat dinner earlier, around 5 p.m. or so. 7 p.m. would be considered a bit late in the night for dinner, and here’s why it may help your health rather than harm it.

The recent study, in the journal Frontiers in Nutrition, found that people who live to be 100 years old follow this specific meal routine.

Why this study suggests you should eat dinner around 7 p.m. every day

The study focused in on people of L’Aquila, a province in Abruzzo, Italy, whose ages ranged from 90 to 99, as well as people who are 100 years old on the dot. The survey found that 68 nonagenarians and centenarians in the region ate most of their dinners around 7:13 p.m. each night. The study also noted that the group followed a generally tight calorie intake, keeping it on the lower side for 17.5 hours from dinner to lunch the next day.

The survey respondents also shared what their diets looked like, which was typically high amounts of cereals, vegetables, fruits, and legumes, low amounts of meat, processed meat, and eggs, and a small amount of sweets.

The experts added, “Our results support the importance of a daily caloric restriction lapse, hampering nocturnal postprandial stress and optimising metabolic response, associated with high consumption of plant-based foods and physical activity for the longevity of centenarians from Abruzzo.”

RELATED: Study Shows Mother-Daughter Trips Are Good For Your Health

Click for next Article
Previous article: This Is The One Artist Mick Jagger Said ‘Outperformed Everyone’
Next Post: One ‘Frasier’ Cast Member Made Daphne’s Accent Worse