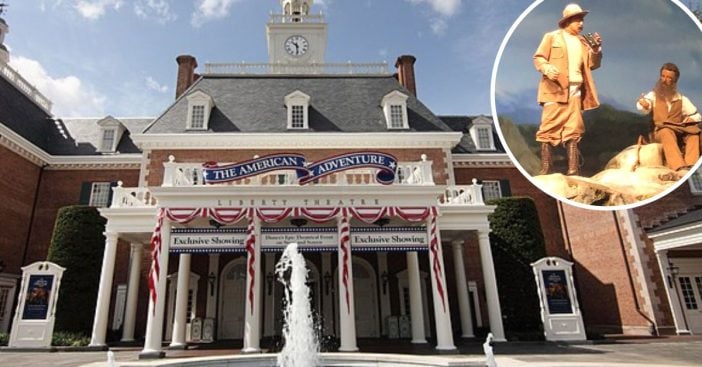 There are so many different rides and attractions at Walt Disney World. In between waiting for the bigger attractions to have a shorter line, you might want to sit in the air conditioning and watch some of the less popular ones. One of those is The American Adventure, which recently had a malfunction with one of the former presidents that was pretty funny!

The attraction follows the history of America and many former presidents are seen during the show. The show features 35 Audio-Animatronics figures and it has been around for many years, so naturally, things go wrong from time to time.

Teddy’s belt broken and his pants are down! Told the team at AA and they’re gonna get him a new belt. #EPCOT pic.twitter.com/6NrAA5Hvzd

Recently, a park guest caught something scandalous! In the show, Former President Teddy Roosevelt’s belt broke and his pants fell down during the show. She tweeted a photo and wrote, “Teddy’s belt broken and his pants are down! Told the team at AA and they’re gonna get him a new belt. #EPCOT”

There were so many responses about the pants that a tweet showed up when it was all fixed. The American Adventure premiered in 1982 and took Imagineers 5 years to get just right. Of course, it has seen some improvements over the years with new technology but is still the show you know and love.

Along with 35 American figures, there are ten different sets stored under the stage that are moved as the show goes on. It is truly a beautiful show if you love history, or just need a break from the heat and crowds during your Disney visit. Have you ever seen The American Adventure at Disney? Have you ever seen it malfunction while you were watching?