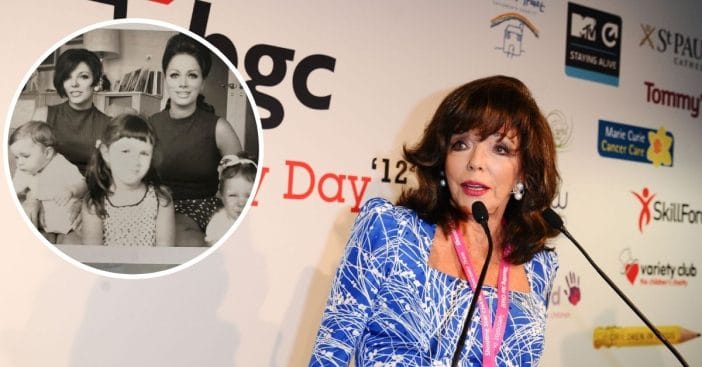 The award-winning English actress, Joan Collins, born in May 1933 has been a stunner since her younger days. She was born in Paddington, London, and attended the Royal Academy of Dramatic Art at age 16.

The actress, author, and columnist is the proud mother of three children- Tara, Katyana, and Alexander.

Joan Collins made her debut at the age of nine in the Henrik Ibsen play, A Doll’s House in 1942. At 16, she went to the Royal Academy of Dramatic Arts in London and was signed to a British Film Studio called the Rank Organization. Subsequently, she appeared in numerous British films including Judgement Deferred in 1952, and her breakthrough film I believe in You in the same year earned her the nickname “Britain’s Bad Girl” with the press.

In 1955, she made her Hollywood debut in the historical drama The Virgin Queen. Her career continued to flourish, and her role in the musical film Tomorrow Morning, due to be released in the spring of 2022, was announced.

She has bagged several honors, including a Golden Globe Award, a People’s Choice Award, a Primetime Emmy Award nomination, and a star on the Hollywood Walk of Fame in 1983. For her charitable works, especially toward children, she was made a Dame by Queen Elizabeth II in 2015.

Asides from acting, Joan is also a philanthropist and writer. She supported many charities for children, including those with special needs, in several countries. She is a successful author of several books and memoirs, with over 50 million copies of her books sold worldwide.

The Dynasty actress shares her two children, Tara and Alexander, with her second husband, Antony, and her daughter, Katya, with her third husband, Ron Kass.

Joan’s sister, Jackie Collins, had died from breast cancer in 2015, two weeks ahead of her 78th birthday. Joan shared a polaroid photo of herself, her two eldest children- Tara and Alexander, her late sister Jackie Collins and daughter Tiffany Lerman on Instagram to celebrate easter. In the caption, she wrote- “Happy Easter, polaroid from many years ago with sister.”

She commented on the death of her sister, Jackie, acknowledging that she was a great mother and baby sister to her. Jackie had hidden her cancer diagnosis because she wanted to avoid being pitied by those close to her. “I miss her terribly,” Joan said on the show, This Morning.”Grief is a process. I think I cried for two or three months, then you get over it and accept it begrudgingly. Then you get angry like why did this happen to her.”

Finally, she penned a heartfelt tribute to her sister after her passing in 2015.