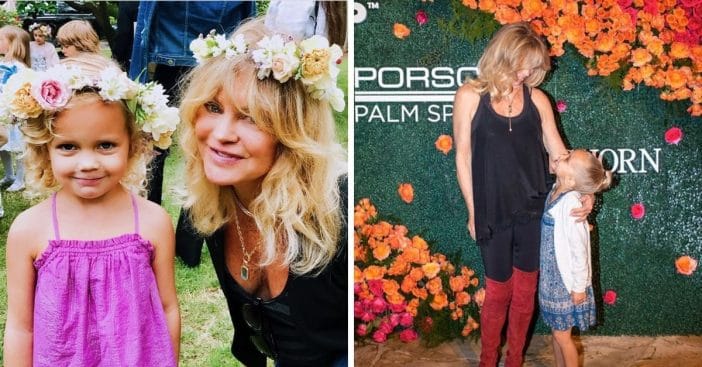 Rio is Goldie Hawn’s granddaughter, and is the youngest daughter of Goldie’s son, Oliver Hudson. Fans can’t help but notice that Hawn and Rio are two peas in a pod, having the same carefree and joyous spirit that anyone can see in any of the photos that Hawn proudly posts of her.

And while it’s evident that Hawn loves all of her grandchildren as she posts photos of them all the time, fans can’t deny how Rio and Hawn must be kindred spirits.

Goldie Hawn’s granddaughter Rio could be her twin!

The photo above from a few years ago shows Rio at her Kindergarten graduation, accompanied, of course, by her grandmother and accessorized with gorgeous flower crowns. As Rio has continued to grow, she looks a lot more like Hawn.

Hawn also shared a photo back in 2019 of Rio accompanying her to a special event. “Couldn’t have picked a better date than my granddaughter Rio for my event in Palm Desert…” she captioned the image, which shows Rio looking up and smiling at her grandmother alongside a plethora of other family photos as well.

Most recently, Hawn has been keeping her fans up to date with everything she’s doing via her Instagram. She’s still acting, too, and we last saw her in the Christmas Chronicles 2 in 2020 and will be appearing as herself in an episode of Gutsy. Most recently, she’s been spending a lot of time with family as well, as she had her son Oliver move into their Aspen, CO home during the Christmas holiday while his home was getting some work done.

Click for next Article
Previous article: ‘Jeopardy!’ Fans Debate: Could Ken Jennings Beat Latest Round Of Champions?
Next Post: Donny Osmond Shares Rare Photo That Brings All His Sons Together